Top 10 Smartwatches with Onboard Music Storage

Recent smartwatches facilitate music streaming by using an active internet connection from your mobile. But if you consider a more practical scenario, locally storing the songs on the smartwatch eliminates the need of carrying your smartphone along for every physical activity that you do. The latest smartwatches now support this feature and I have listed the best smartwatches with internal music storage that can directly play your favorite tracks without connecting to a streaming service. Without further ado, let’s dive into the list of Top 10 Smartwatches with Onboard Music Storage. 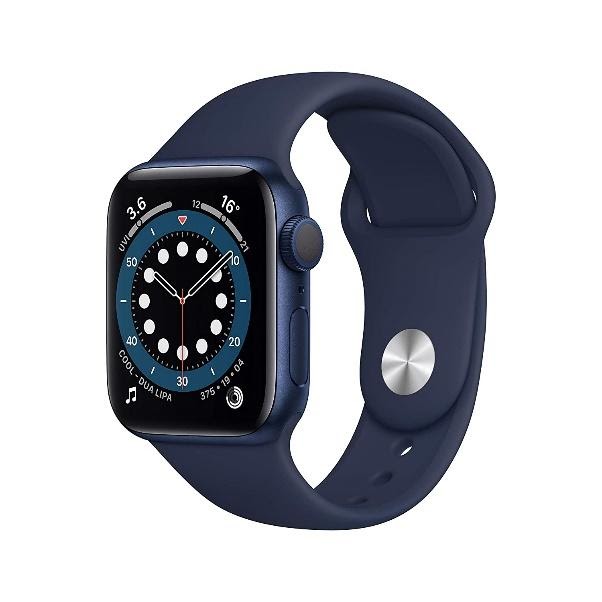 Apple Watch Series 6 is undoubtedly the best smartwatches available to consumers. It does bind you to the Apple ecosystem but packs a lot of useful features including the option for local music playback. Apple Watch Series 6 comes with a large 1.73 inches OLED display that facilitates easy navigation of your favorite tracks. Along with a 32GB storage capacity that can store hundreds of music tracks and multiple favorite playlists.

Uploading music tracks to your Apple Watch Series 6 is pretty convenient. You just have to use the companion app on your smartphone and then download the music to the watch, while it’s in charging mode. After that, you can play any music track stored on the watch without the need for an Internet connection or a music streaming service. Just connect your AirPods and experience offline music while performing your favorite workouts, without worrying about signal drops and inferior quality of streaming audio. 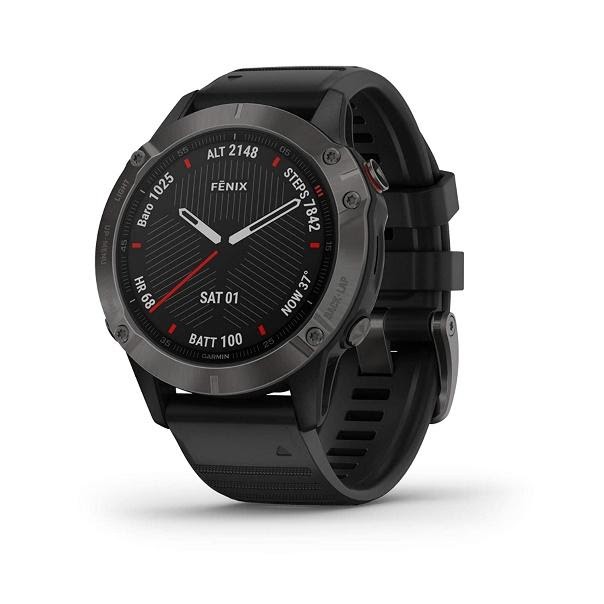 The Garmin Fenix 6 Smartwatch is a premium smartwatch that is built to last. The metallic encasing makes it slightly beefier than the Apple Watch 6 but the overall package that this Smartwatch offers, cannot be matched by most other offerings in the smartwatch segment. The watch comes with a plethora of health tracking features and sensors, along with a large storage space of 32GB for apps and offline music.

Garmin Fenix 6 is also waterproof and can sustain 10 ATM pressure. Clearly, it is aimed at fitness enthusiasts who do not want any compromise with fitness tracking and health-tracking features. It can store up to 2000 songs before running out of space and supports Deezer, Spotify, and Amazon Music, using which you can download songs for offline playback. You have to be subscribed to the premium version of these applications in order to download tracks onto your Garmin Fenix 6 Smartwatch. 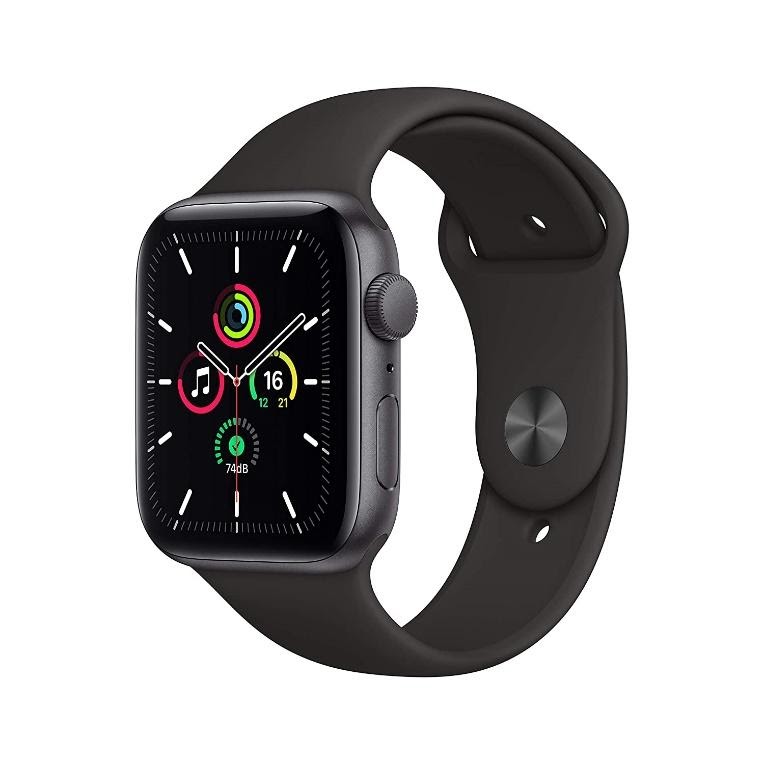 Apple Watch SE is a budget offering in the Apple watch lineup that retains most of the features of the Apple Watch 6. The customization choices in terms of the case material, the strap options, and the overall diameter as well are somewhat limited in Apple Watch SE. That being said, it is still one of the reliable smartwatches that pack with a staggering 32GB storage space. Like the Apple Watch 6, the Apple Watch SE can also store music tracks for offline playback.

You just have to upload the songs to the Apple Watch SE and can then enjoy your favorite tracks by wearing a Bluetooth earphone with your smartwatch. 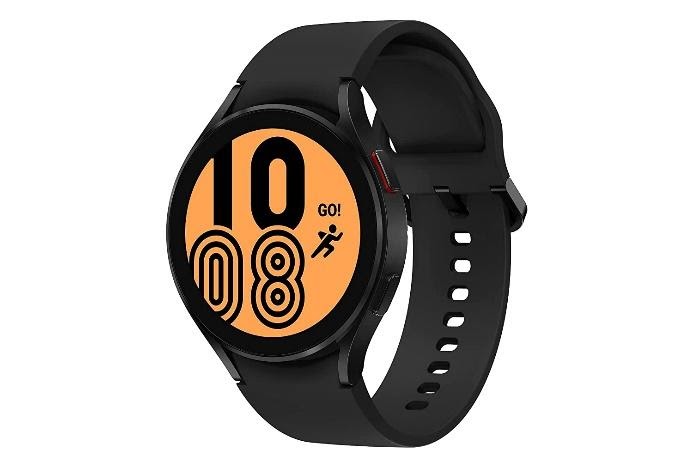 Samsung Galaxy Watch 4 is the latest iteration in the Galaxy watch series is one of the Top 10 Smartwatches with Onboard Music Storage. And it looks stunning and comes with storage space for downloading apps and music. This smartwatch comes with the support for Google Wear OS 3 that allows you to download apps from the Google Play Store in the watch itself. The main highlights remain the increased RAM and storage capacity, along with a higher display resolution, and the addition of more useful sensors for health and fitness tracking.

You can download almost any music streaming app that is supported by the Google Wear OS 3 and can save music tracks for offline playback. The catch here is that either you choose to upload tracks to your Samsung Galaxy Watch 4, or you have to be a premium subscriber of Spotify or other popular music streaming apps to save music for offline playback. there is no earphone jack or internal speaker on the Samsung Galaxy Watch 4 which leaves Bluetooth earphones or headphones as the only option to listen for offline music. 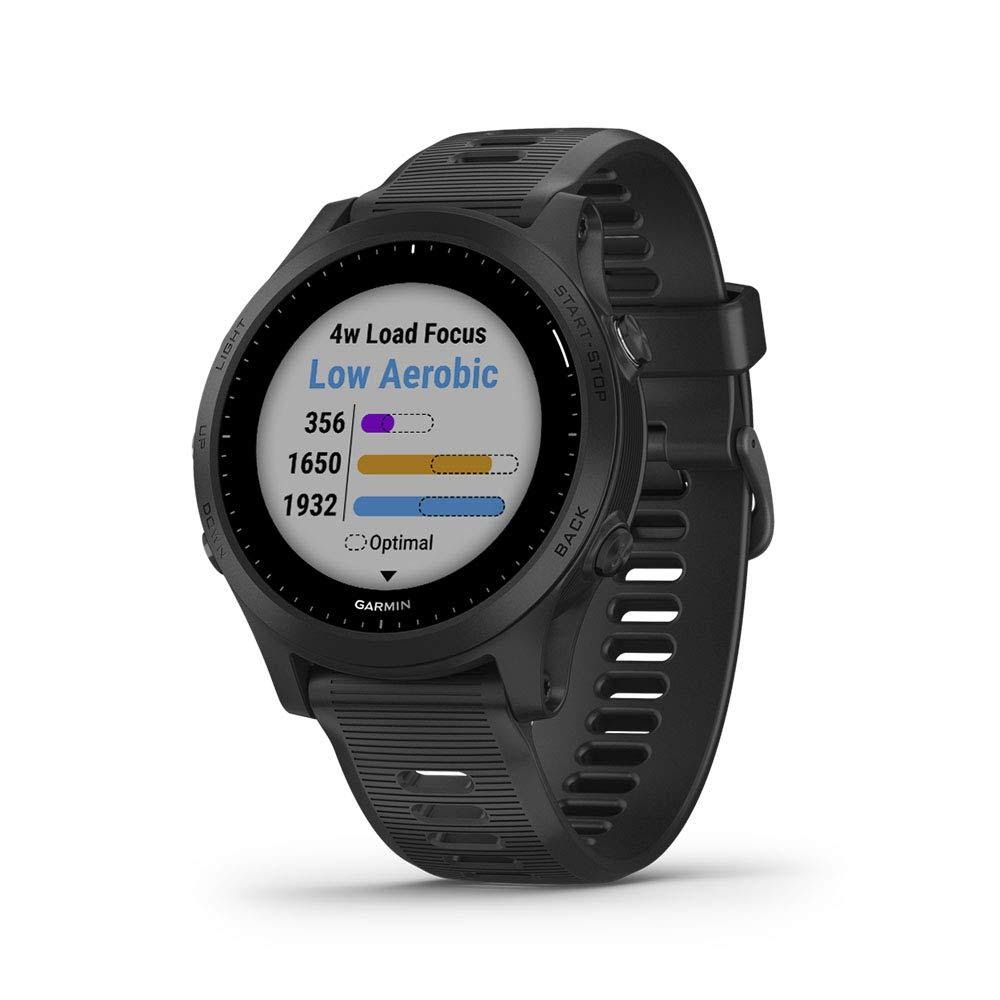 Garmin Forerunner 945 is designed for triathlon enthusiasts and athletes who love to track their everyday performance. The watch is the gold standard in terms of fitness tracking and comes with GPS surely this is one of the Top 10 Smartwatches with Onboard Music Storage. And support for LTE connectivity as well. All of these features are encapsulated in an exorbitant package that is slightly cheaper than the Garmin Phoenix 6 Series smartwatches. The battery life is the USP of the Garmin Forerunner 945, as it can outlast most of the competition despite continuous music playback.

The Garmin Forerunner 945 supports mp3 tracks playback in the offline mode along with the support for Spotify, Deezer, Amazon Music, and iHeartRadio. If you are a subscriber to any of these music streaming services, then offline storage of songs is possible. Make note that the watch has an internal storage space of 16GB but allocates a maximum of 4GB for music storage. So, you may have to confine your offline library on the smartwatch to a select few tracks. 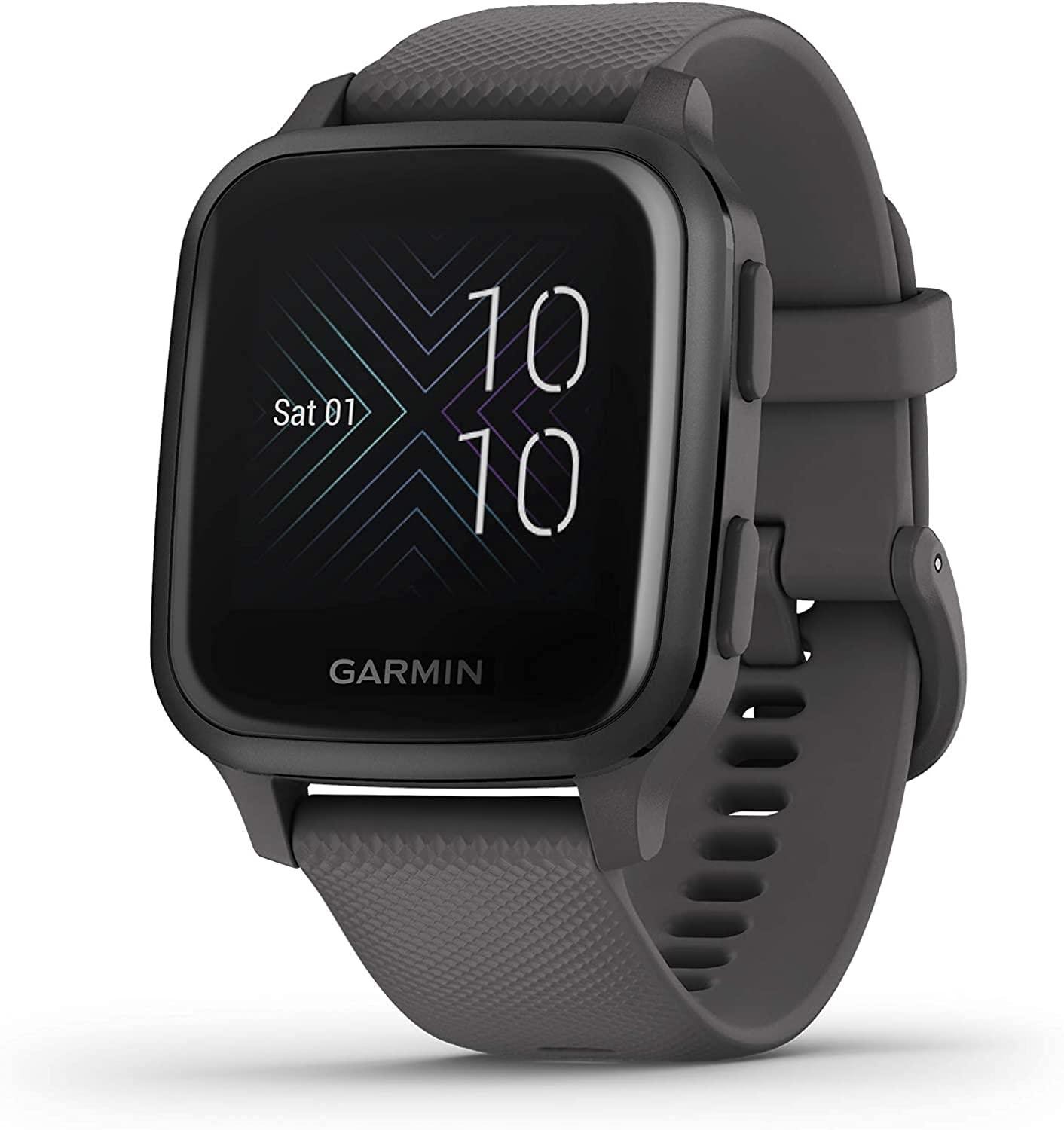 Garmin Venu Sq is an economical offering in the Garmin music smartwatch series that comes with fairly modest storage space for offline music playback. The smartwatch has 4 GB of total internal storage space from which only 3.4 GB is used for saving your MP3 files. Spotify, Deezer, and Amazon Music are supported by default, and you can use them for streaming music, and saving the tracks or playlist for offline playback as well.

It is a stripped-down version of the premium lineup of Garmin smartwatches, so a few of the fitness tracker features and the overall battery life, are trimmed by a small amount. Nevertheless, if you want to escape the clutches of always-online connectivity for music playback, Garmin Venu Sq is a viable option with admissible storage space for the price. 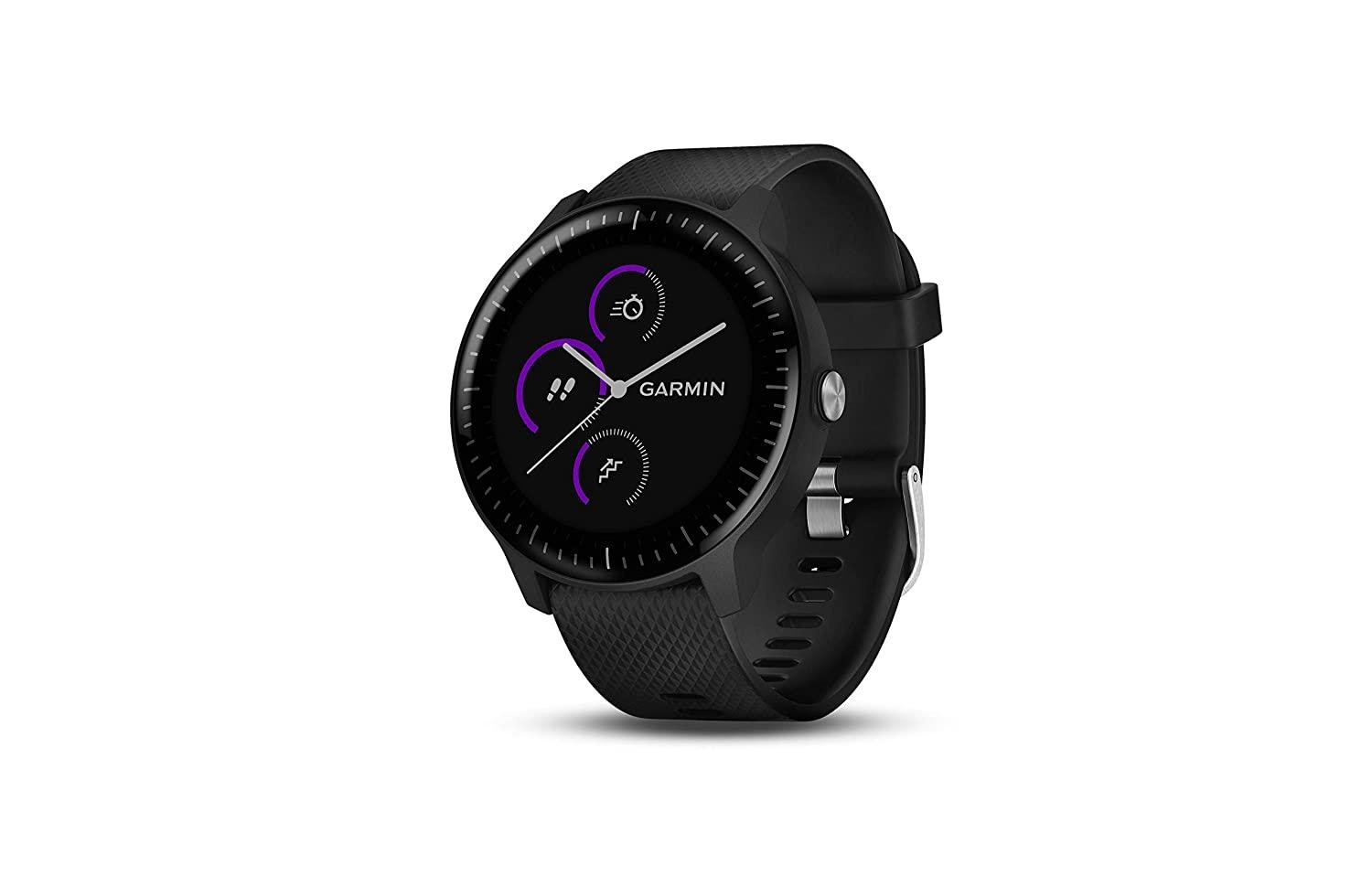 Garmin vivoactive 3 Music is a fairly old smartwatch that caters specifically to the music aspect and comes with a usable 3.5 GB of space for storing MP3 tracks. It also supports a variety of other audio formats as well, and to upload the music tracks to this smartwatch, you have to use the Garmin Express program on your computer. In the beginning, it only supported iHeartradio, but later added Deezer and Spotify into the list of supported apps as well.

Needless to say that, you require a premium subscription for downloading music tracks from any of these streaming services. Apart from that, there are very few noticeable changes in the Garmin vivoactive 3 Music, if you compare it with its predecessor Garmin vivoactive 3. Bluetooth headphones and earphones are your only option, as the smartwatch lacks a 3.5 mm input or an inbuilt speaker. 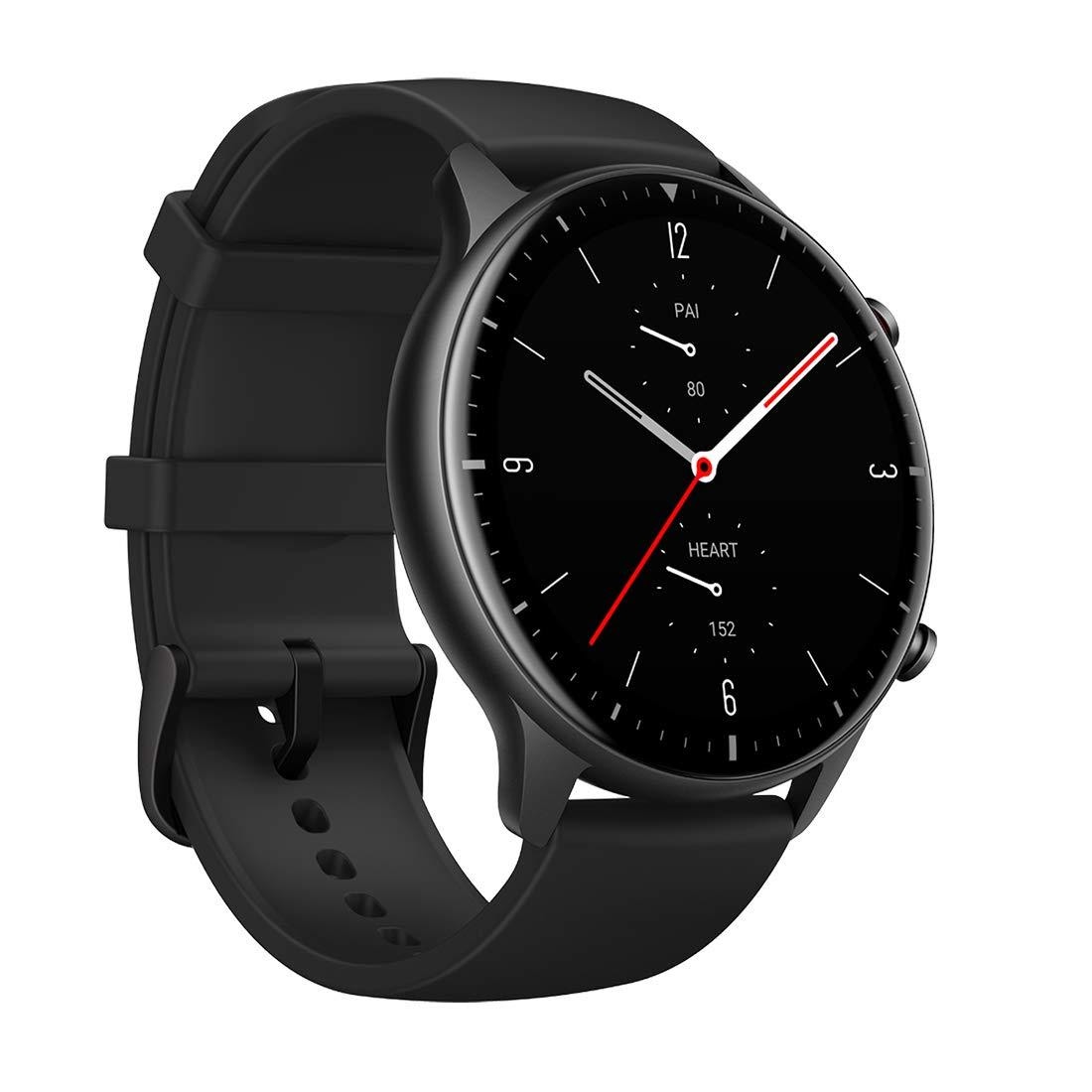 Amazfit GTR 2 set the standard for offering premium-looking smartwatches for the budget segment Consumers. It packs the latest health tracking sensors like SpO2 with precise sleep tracking and stress monitoring. The smartwatch is complete in every aspect and comes with 3 GB of usable storage space which can save music files. Sadly, there is no support for third-party streaming services applications such as Spotify, Deezer, etc., which confines you to use only the downloaded MP3 files.

Uploading the music files on the Amazfit GTR 2 is a simple process that requires the Zepp app on your smartphone. You just have to select the tracks and upload them on the smartwatch. Amazfit GTR 2 is recommended for users that hold a massive MP3 file library and do not use music streaming services like Spotify on their smartwatch. 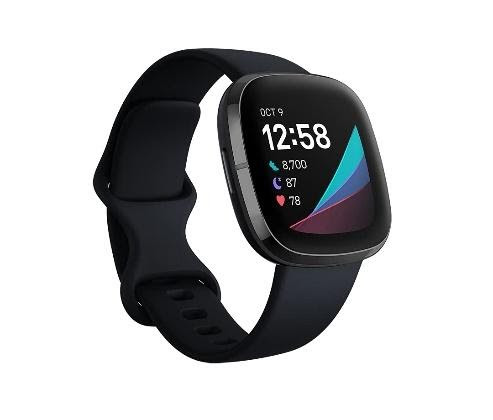 Fitbit Sense is a top-tier offering from the brand that is direct competition to the likes of Apple Watch, Samsung Galaxy Watch, and a few other competitors. The number of sensors, battery life, the AOD display, every feature that you need or may need is present in it. It even has NFC for contactless payments but the number of banks that support it is limited at the moment.

Fitbit Sense supports offline music storage and even supports a few streaming apps such as Pandora and Deezer which can store music for offline playback. If you use Spotify and are a premium subscriber, you cannot store offline songs from the app. The smartwatch is one of the Top 10 Smartwatches with Onboard Music Storage. Also, supports a limited number of audio file formats. Including MP3, MP4 with AAC, and a few more. 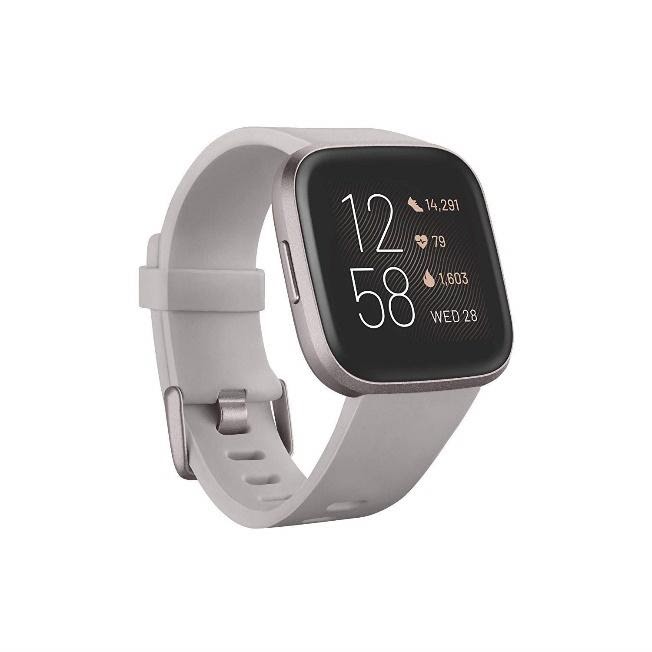 Fitbit Versa 2 is an economical proposition for users that need a smartwatch that is big on fitness tracking. There aren’t many flaws in the Fitbit Versa 2, fitness or health tracking wise surely, this is one of the Top 10 Smartwatches with Onboard Music Storage. However, it misses out on the integration of Spotify as a complete app as it does with Deezer and Pandora. Missing out on Spotify’s offline music playback feature makes it a lackluster smartwatch in terms of compatibility with popular music streaming services.

Keeping the harsh criticism aside, the Fitbit Versa 2 follows the same process of uploading tracks on the watch with the help of the desktop application. The file format support is still limited and you have a total of 2.5 GB available capacity for storing your favorite tracks. If you store higher bitrate songs, the storage will fill up in just a few tracks.

These were my picks for the best smartwatches with internal music storage. The Apple Watch 6 and Garmin Fenix 6 Pro continue to take the crown with a whopping 32 GB of internal storage space for music. As you navigate down the list you will find economical options as well that come with a modest internal storage capacity. If you feel that I have missed a good smartwatch with internal storage, feel free to add your suggestions in the comments section below.