AR games or Augmented Reality games expand your playfield and strive to provide a sense of realism and immersion into the gameplay. They achieve so by integrating the virtual elements into a real environment and are an absolute mind-boggling experience to endure. Augmented Reality Games haven’t become extremely popular but are more of a cozy niche when it comes to players looking for something that doesn’t confine them to a chair. I will be listing out the Top 10 Augmented reality games available for handheld devices, that will help you escape your gaming chair, and be part of a larger-than-life game that promotes some extent of physical activities as well.

The Pokemon GO is considered the OG of augmented reality games that set a precedent for more game developers to jump into the genre. Pokemon has a cult following across the globe and its earlier iterations of PC and mobile games have had a decent reception from fans. The developers surprised everyone with the AR game that required players to search for pokeballs on a real-world map, unlike the previous versions. 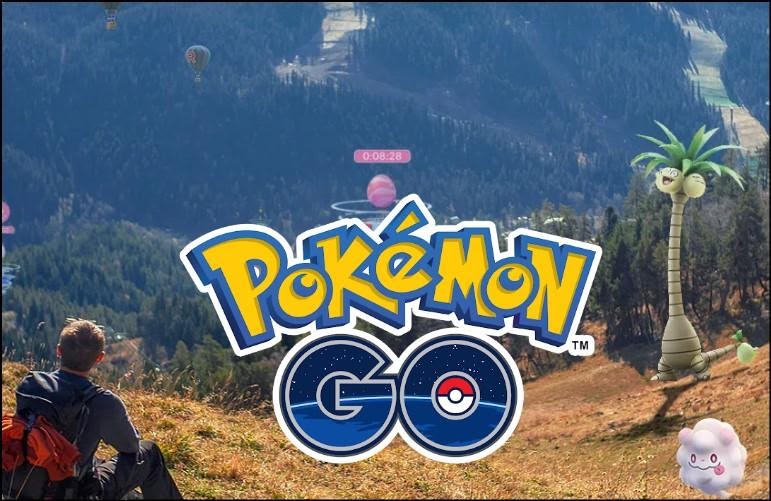 Pokemon Go added trainer battles and raid battles that amplified the pokemon hunting and battling experiences even more. It is not new but the Pokemon community is so vast that you will never find it monotonous for the slightest bit. It is a free-to-play game with in-app purchases that needs basic smartphone hardware with a robust internet connection at all times.

The DC: Batman Bat-Tech Edition puts you in the shoes of a problem solver alongside the best detective ever “Batman”. Players get to fiddle with bat-tech and help catch criminals by investigating the clues left behind. It offers ten mini-games and each of them lets you experience a skill such as using a unique batman gadget or driving into Gotham city in the batmobile. Players also get exclusive access to five digital comics, AR face filters, sticker packs, and much more. It is also free-to-play with in-app purchases that allow you to level up easily and outshine the competition. 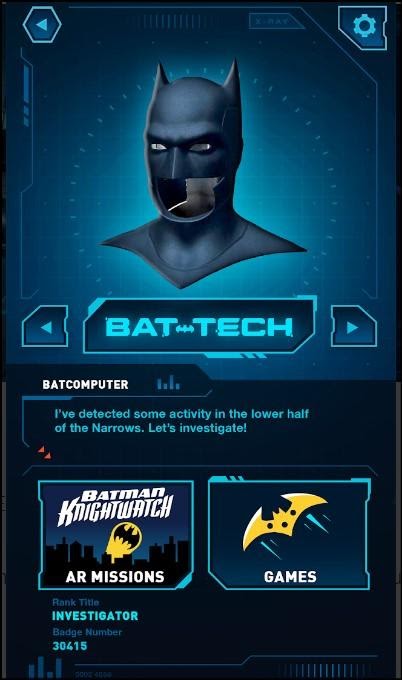 The Ingress Prime is among the best Augmented Reality games available for Android users. Ingress Prime is available for iOS which is a piece of good news for the ecosystem users, as the game is one of the few AR games that are highly collaborative and engaging at its core. You are presented with the choice to join either of the two factions before you enter the game. These two sides are – The Enlightened and The Resistance. Players can pick a side and begin creating portals in the real world. The game received critical applaud for its foresight and the implementation of AR into the mobile gaming world. Its latest updates have mangled the gameplay but Ingress Prime deserves a try. 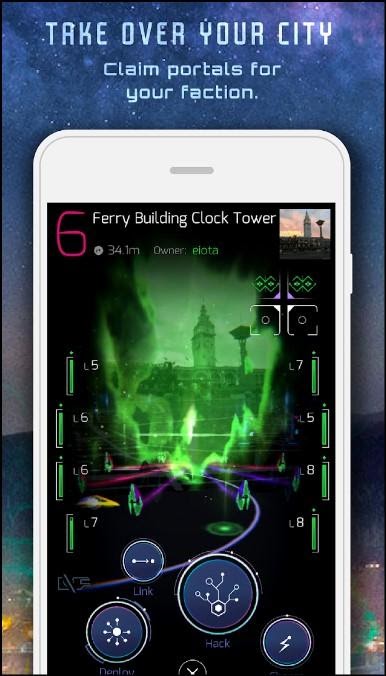 The Jurassic World Alive is similar in comparison to the Pokemon Go game where you have to venture out in the world to collect and battle. Instead of Pokemon, you have to find dinosaurs and expand your line-up to gain a stronghold over other players. Players can even mix DNA and build hybrid dinosaurs that exercise dominance over other players. Jurassic World Alive lets you enter PvP battles and compete to earn daily rewards. There is even an option to share images of your dinosaur collection with the rest of the world. Jurassic World Alive offers a monthly subscription plan that minimizes the need to go for in-app purchases every time. 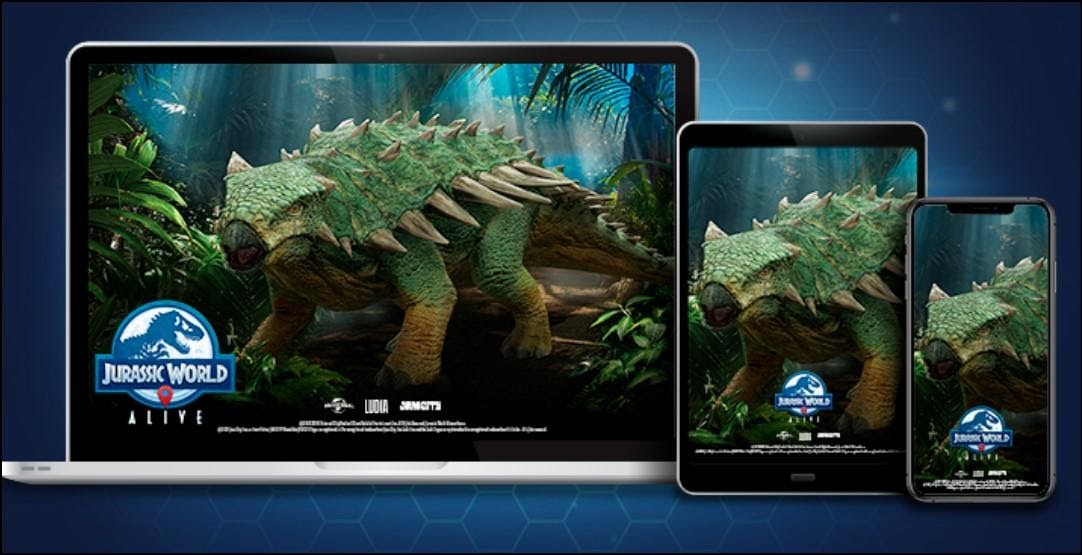 Want to experience how Knights battled ages ago? The Knightfall AR is a must-try for all game enthusiasts. The game lets you relive the battles that Knights and their army had to endure to save their kingdom. The AR elements in this game are pretty well executed and you get to experience the flying arrows, the utter devastation of troops, and can even notice the dead birds catapulting into the air as the mortar shells hit the troop and the surrounding environments.

Like most games, the single-player mode can get pretty bland after a few hours, which is why we suggest you experience Knightfall AR in multiplayer mode. This best AR game is available for both Android and iOS devices and is free without any in-app purchase option. 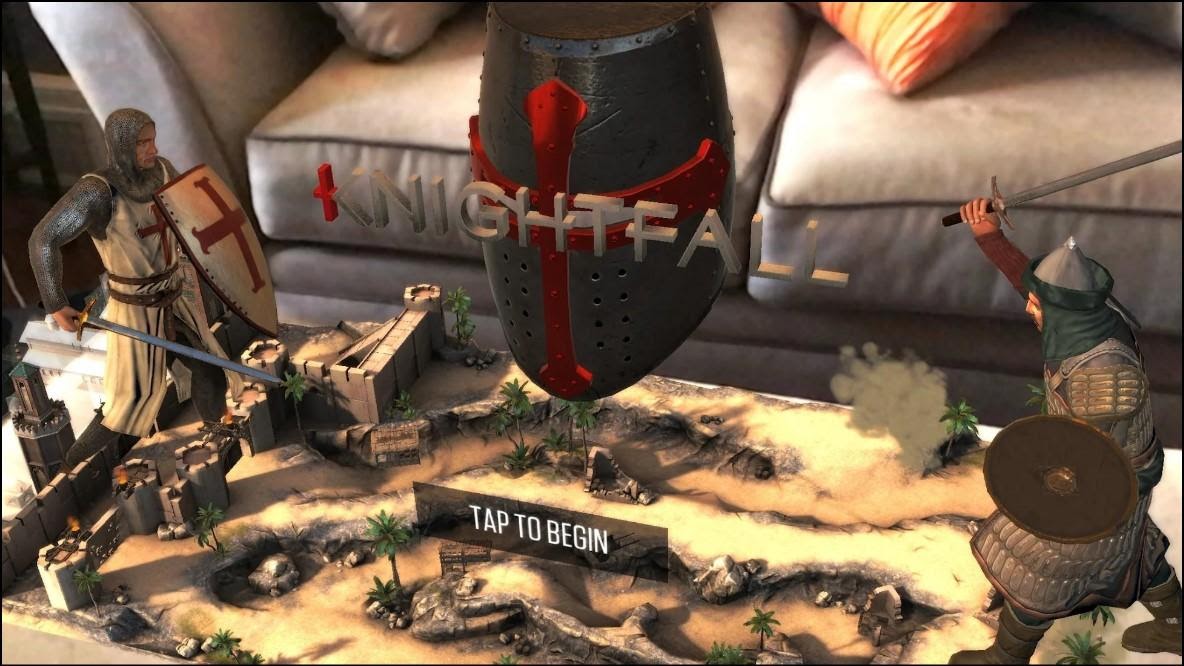 6. The Walking Dead: Our World

The Walking Dead: Our World brings the zombie apocalypse straight to your mobile devices. As a standalone game without the AR elements, it is quite fun but when you use the AR mode, the gaming experience is on another level. It incorporates the zombies into the environment you scanned with your camera and it feels just as if they are approaching right in front of you.

You get to play with the characters from The Walking Dead TV show and act as an aide to help stop hordes from attacking them and converting them into a zombie. The Walking Dead: Our World is a freemium affair with micro-purchases required for upgrading your arsenal. It is available for both iOS and Android and does not require a subscription on either of those platforms. 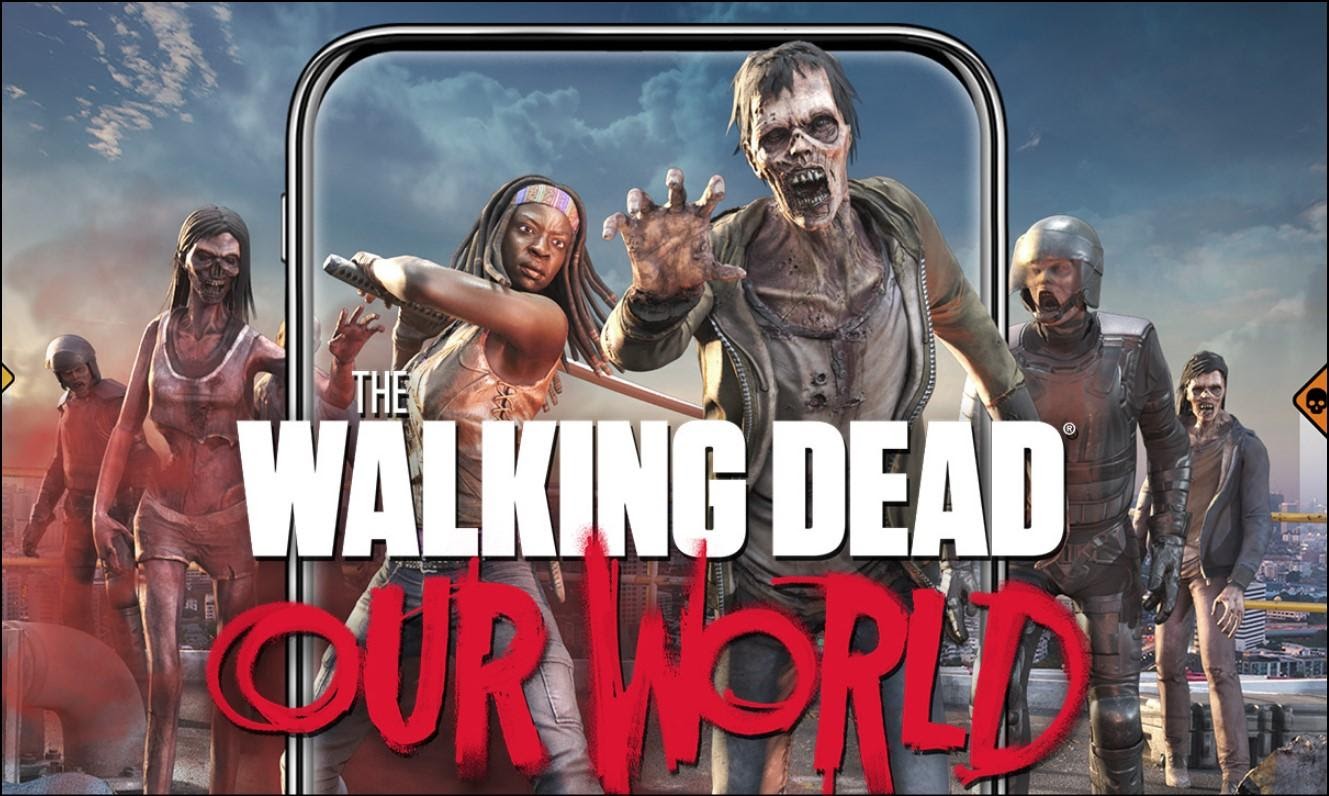 Zombies, Run! is aimed to build your fitness while providing an immersive gameplay experience. It is a purely audio-focused running game where you have to use the earphones for a better experience. The premise is simple – run whenever the narrator informs you about the incoming hordes and even increase your pace as they get closer.

There are a lot of seasons with good storylines that keep you engaged for a long, long time. This game is best suited for people who need an excuse to run and need something convincing enough to get out of bed. You can enjoy Zombies, Run! for free and can upgrade to the premium version if you need access to seasons and the latest events. 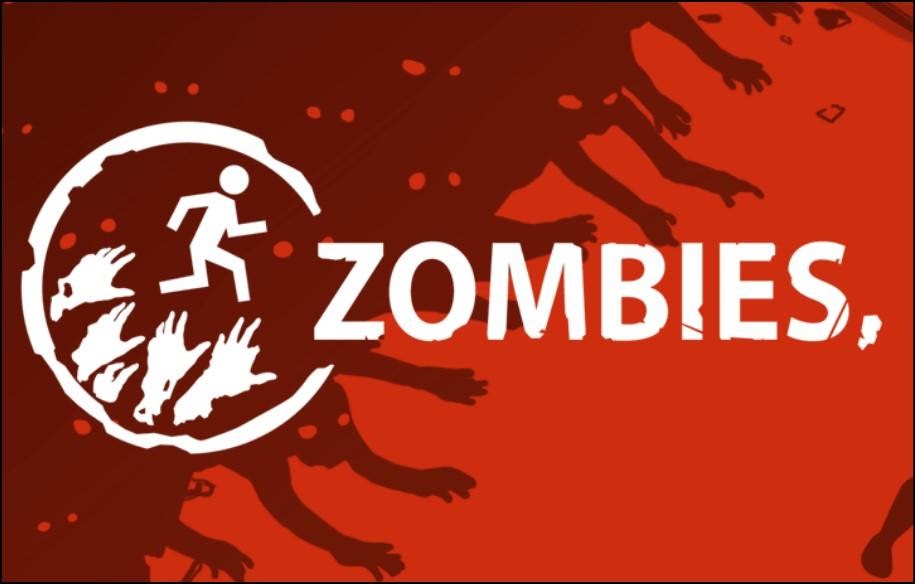 Harry Potter: Wizards Unite opens a getaway to the world of wizardry and lets you help save the trapped wizards while combating monsters. You don the role of a wizard and save trapped wizards while unlocking collectibles in the process. The game lets you even combat with other players and enter duels that can be one by swiftly using spells and wands. The AR elements are used in moderation; the world is basically your map. You do have to step out to find collectibles and upgrade your inventory. It can be tiresome as the pricing is very high in exchange for a very small portion of virtual goods. 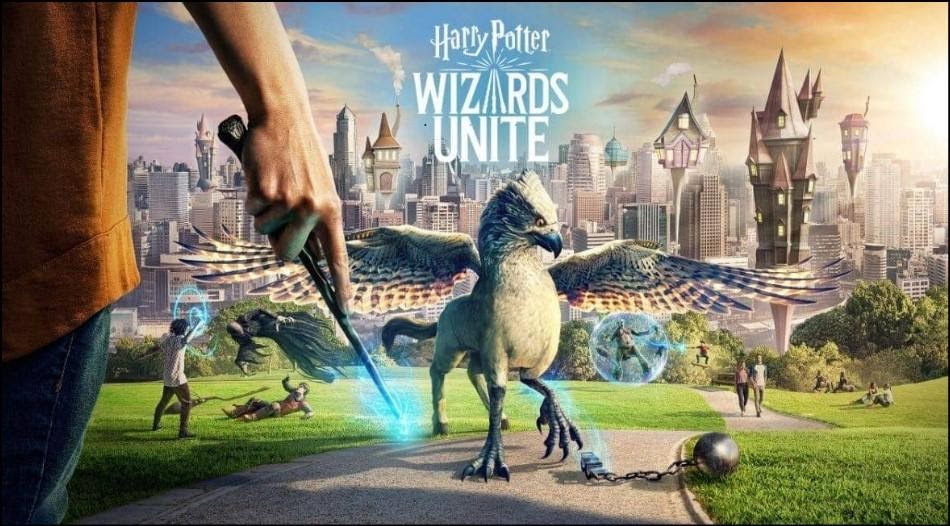 Shooting hoops in a real location is everyone’s dream. But finding hoops isn’t possible that way. AR Sports Basketball lets you experience the joy of playing basketball outside by providing an interactive AR game based on shooting hoops. The current background is tapped into the mix to give a sense of realism to the players and it looks part-cartoonish and part real. There is also an endless game mode that lets you shoot hoops until you get tired. AR Sports Basketball is completely free but lacks a multiplayer mode. 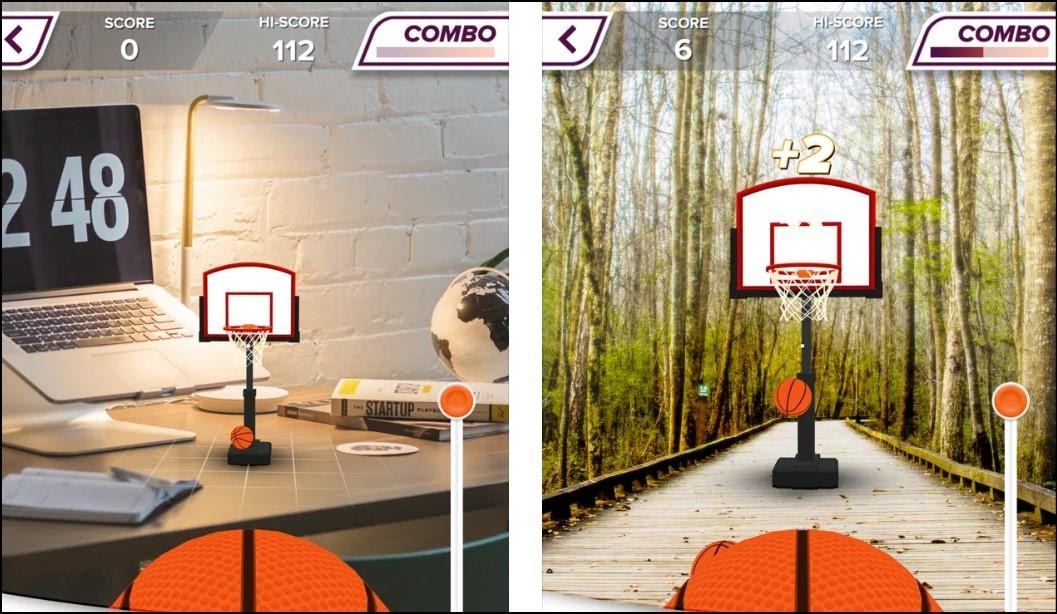 Jenga AR is exactly what it sounds like. An augmented reality Jenga game that is fun to play with family and friends. You can rotate the tables and pick out pieces unless nothing is left. A major advantage of Jenga AR is that you cannot accidentally tip over the tower and ruin the game. Its pass and play feature ensures that even 5 players can play by sharing one single device.

There are four different worlds or backgrounds which add some color and vibrancy to the bleak tower setup. Jenga AR is free to play for handheld devices and is available for both Android and iOS devices. 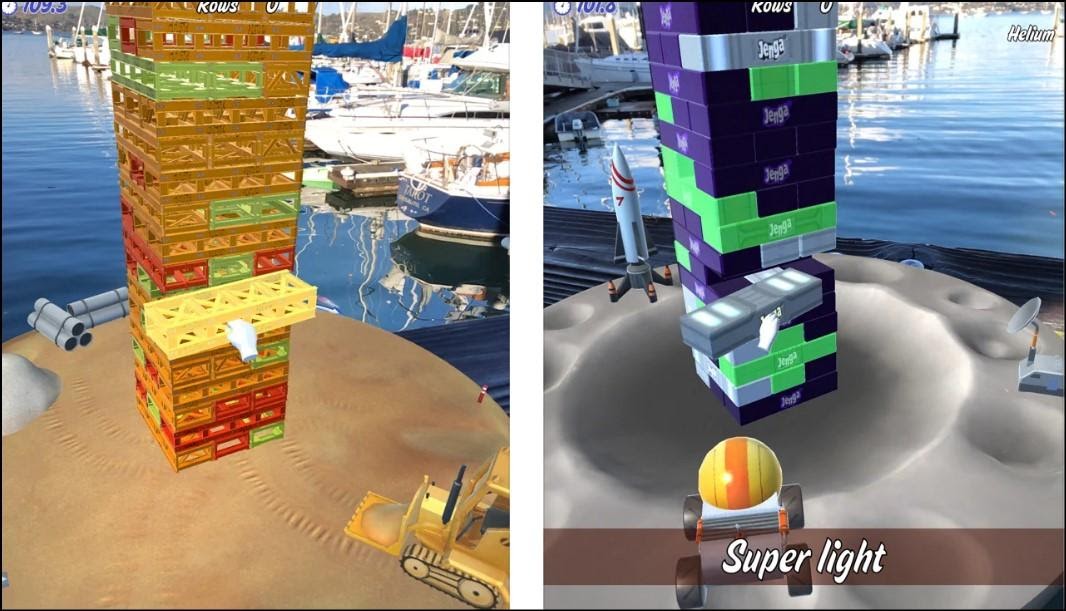 These were the best AR games available for mobile devices that you can try. Pokemon GO and Ingress Prime are two legendary AR games that you can enjoy because of their vast community. If you love walking dead and zombies in general, then Zombies, Run! and The Walking Dead: Our World is worth trying. Lastly, if you crave a simple AR game then AR Sports Basketball and Jenga AR are two free options that you will absolutely love.