Fitbit is no longer just a band but also a smartwatch that is capable of competing with big players such as Apple and Samsung. 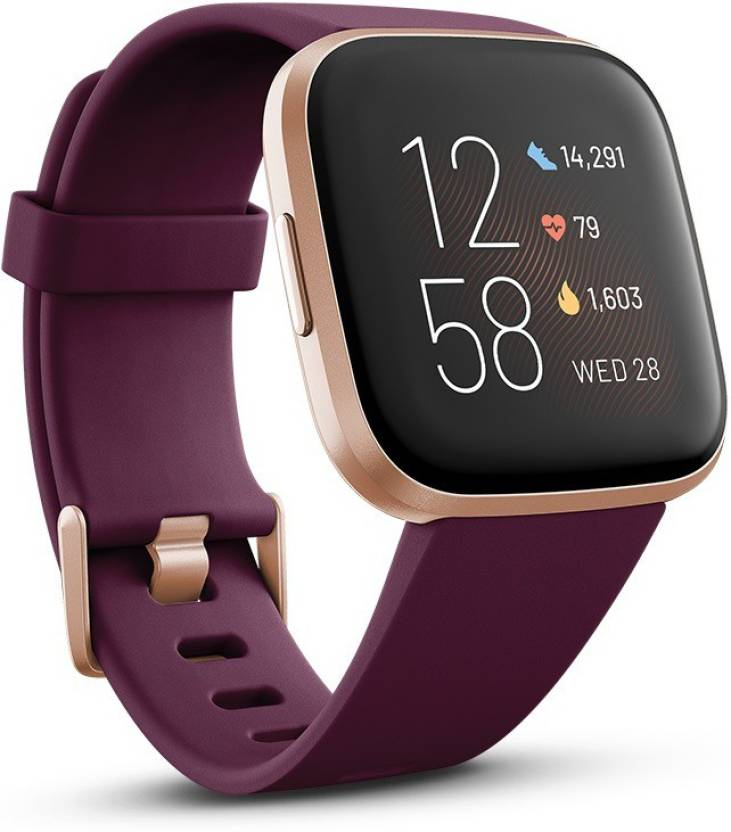 Fitbit Versa 2 Review: Not very long ago, Fitbit revolutionized the wearable sector. It showed how incredibly useful it is to have a fitness tracker around your wrist. However, with increasing competition, Fitbit faced numerous challenges. Wearable in the premium segment from big names such as Apple and Samsung changed the landscape. Also, smart bands from Chinese manufacturers in the low price segment became even more challenging for Fitbit. Versa 2 is the first product from Fitbit that showed an enormous potential to compete in the same market that Fitbit helped to create. 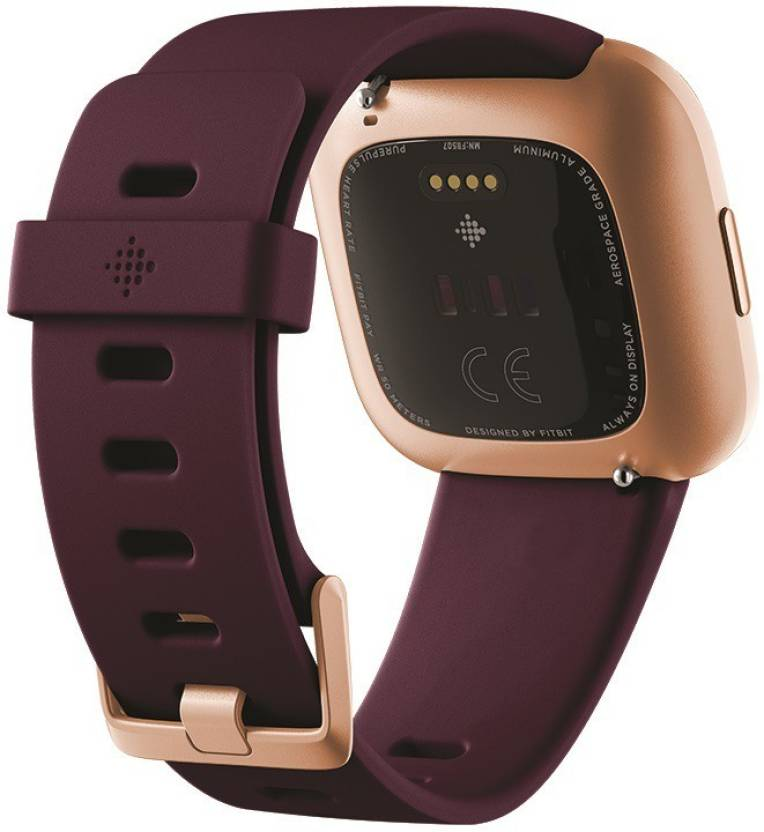 Unlike Fitbit Versa, the Fitbit Versa 2 has a much better design. Its dial is made of anodized aluminum which gives the watch a decorative look and also helps the dial from getting corroded. As always, the AMOLED touchscreen gives a classy look to the screen. AMOLED display gives the user an ability to read what’s on the screen from various angles and lets the display blend in with the bezel space around it.

Sensors on the watch include a 3-axis accelerometer for motion detection, an altimeter for measuring vertical movement, an optical heart rate sensor for heartbeat measurement, an ambient light sensor for auto adjustment of the screen light, a SpO2 sensor for measuring blood oxygen level, and an NFC sensor for making contactless payments using your digital wallet.

Fitbit Versa 2 has an ‘always-on’ feature. I find this feature very helpful, especially to check the time and other important health metrics without the need to turn on the watch. Also, we can have the ‘always-on’ feature with multiple watch faces- you are not stuck with the default analog design. 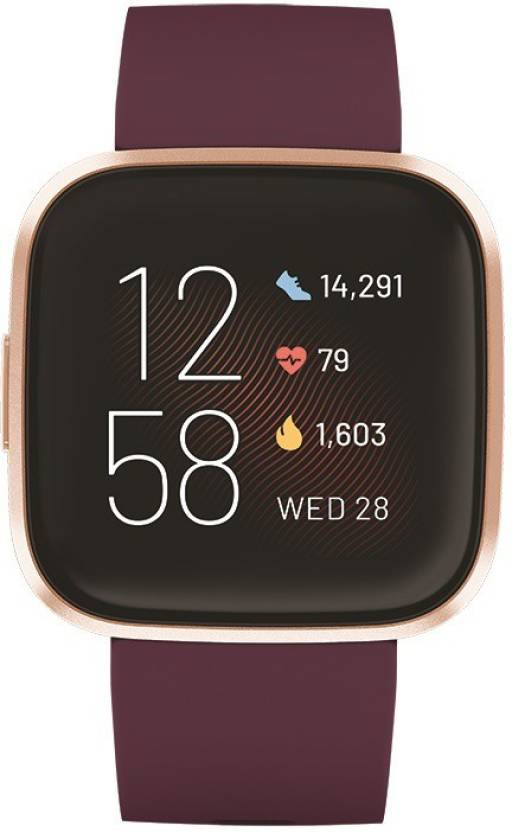 Fitness, of course. It all started with Fitbit! Health tracking is pretty accurate in Fitbit products. Fitbit Versa 2 has the right number of sensors that you need in a fitness tracker. In addition to the 3-axis accelerometer, we have an Altimeter that measures the altitude from a base reference level. So if you are going for a trek or if you are running on the treadmill at certain inclination, Fitbit Versa 2 doesn’t miss tracking the extra effort you are putting in while displaying the health metrics.

The lack of in-built GPS is a bummer. No matter how good the sensors are, it is very difficult for trackers to get accurate distance and pace metrics without GPS. The good news is that you have connected GPS, which gives Versa 2 the ability to piggyback your smartphone’s GPS and use it as an alternative to in-built GPS. Give a moment and ask yourselves “do I carry my smartphone for outdoor running or cycling or any other outdoor fitness pursuit?” If you carry, then you don’t need to worry about the lack of in-built GPS.

All in all, the Fitbit Versa 2 can track your calories burned, step count, distance ran, number of steps climbed (using Altimeter), heartbeat, sleep quality, and active minutes (reminds you if you are very inactive). I find no issues with the accuracy of any of the aforementioned metrics. There are about 15 workout modes including swimming, yoga, running, biking, and weight lifting. You can also set goals for some of these exercises before starting a workout and see for yourselves if you have attained these goals. 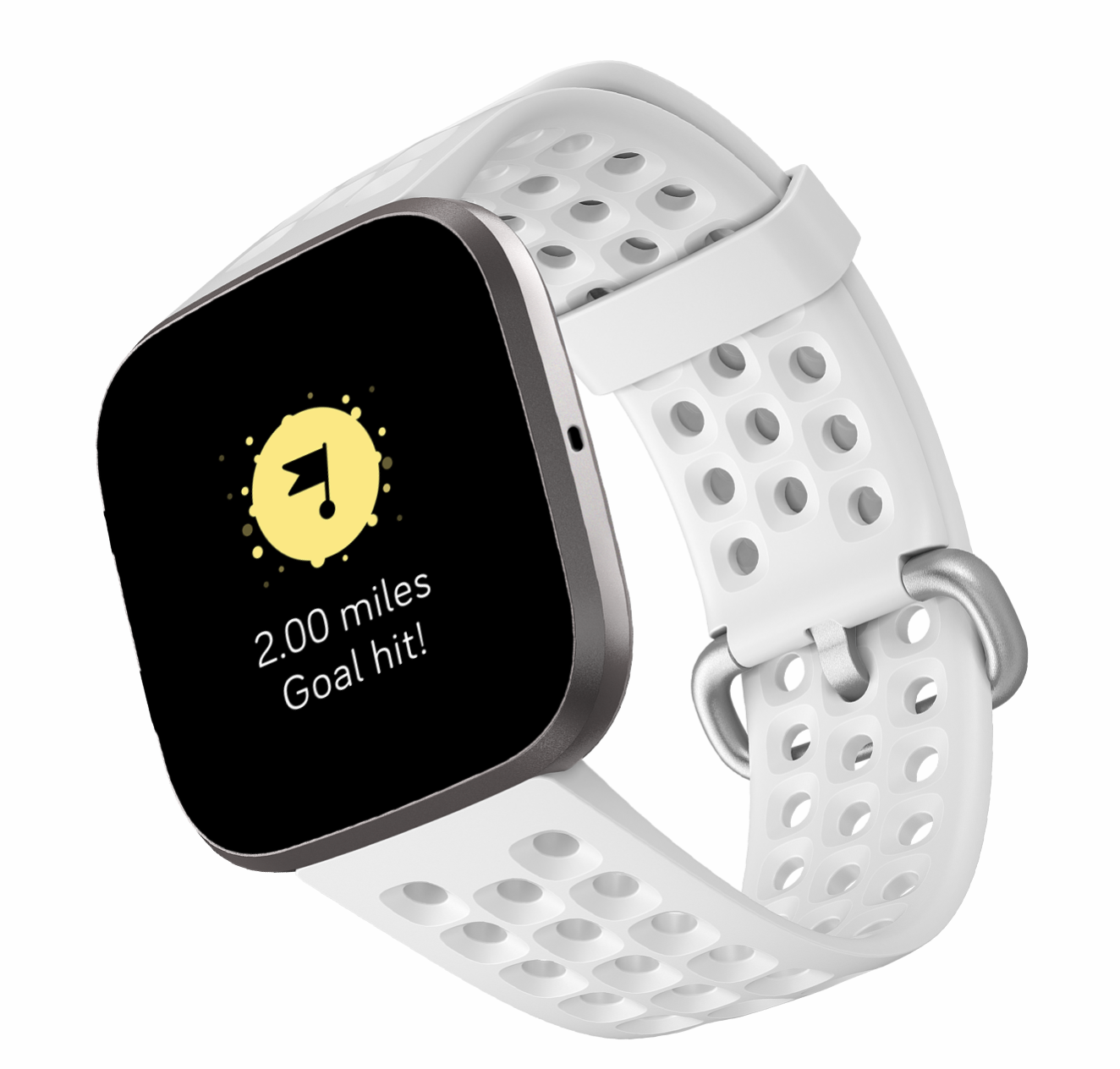 The Fitbit Versa 2 can measure your VO2 Max, which is an indicator of your cardio fitness level. VO2 Max can tell you how long you can sustain a certain type of exercise. It tells you if you are overdoing a workout. A higher VO2 Max is good since it essentially means you have more endurance and a relatively higher breaking point. VO2 Max is not as accurate as you would see in a laboratory equipment. However, this gives a good range of your fitness level. 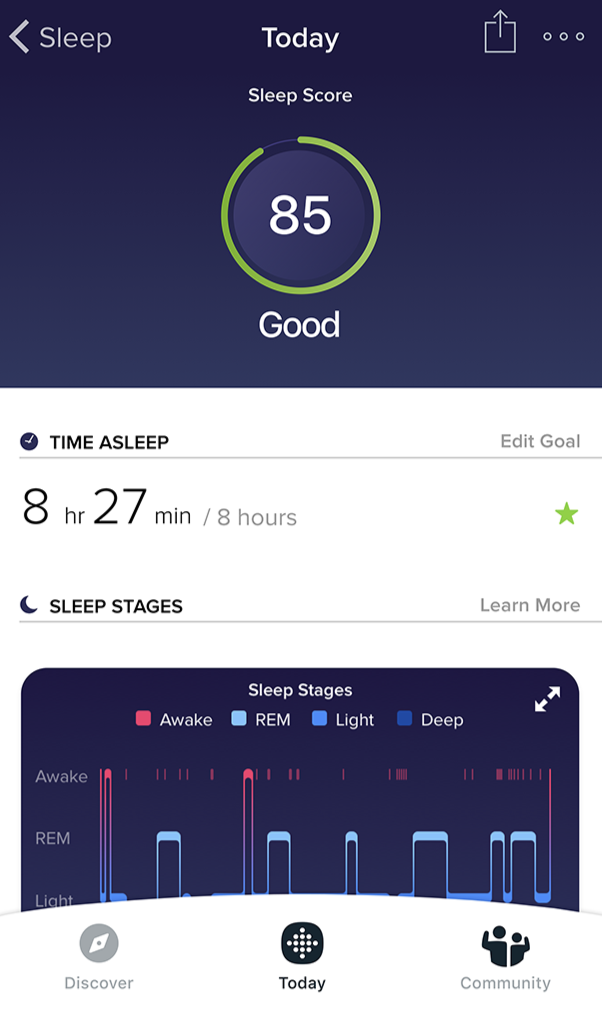 Sleep monitoring goes beyond just giving deep, light, and REM sleep modes. The Fitbit Versa 2 gives you a sleep score that maxes out at 100. The closer you get to 100, the better your sleep is. It gives how restless you are during your sleep and other sleep quality metrics. If you think you won’t feel uncomfortable wearing a watch while you sleep, make use of sleep tracking.

Fitbit uses its own operating system ‘Fitbit OS’. The apps and services that are compatible with Fitbit OS are limited compared to the ‘Wear OS’ from Google, ‘Watch OS’ from Apple, and ‘Tizen’ from Samsung. To provide more third-party integration, Fitbit needs to do some heavy lifting to catch up with the big players in the market. 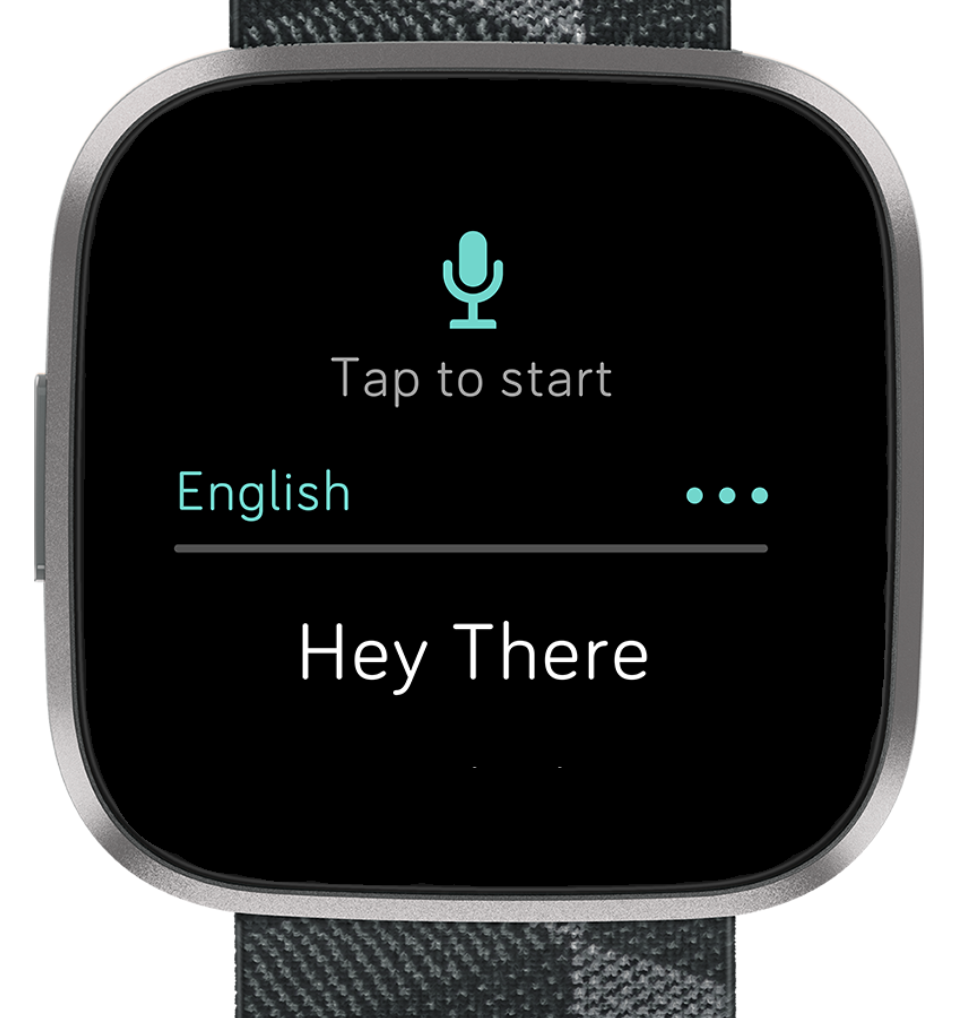 Fitbit Versa 2 uses Alexa as a digital assistant. There is every reason to be excited about having Alexa as a voice assistant since it is one of the leading voice assistants in the market. Alexa can tell you information from the internet, gives your daily fitness stats, and other basic things.

The important thing to note is that Alexa can’t control anything in your watch- it can’t be activated with a hot word, can’t play music, does not send text messages, and doesn’t have control over other functions in the watch. You can still send a text message with your microphone while hitting the reply, but not directly by saying “Send a text message to XYZ’. So there is a need for much deeper integration. Right now, you will face a half-baked experience with Alexa on Fitbit Versa 2. 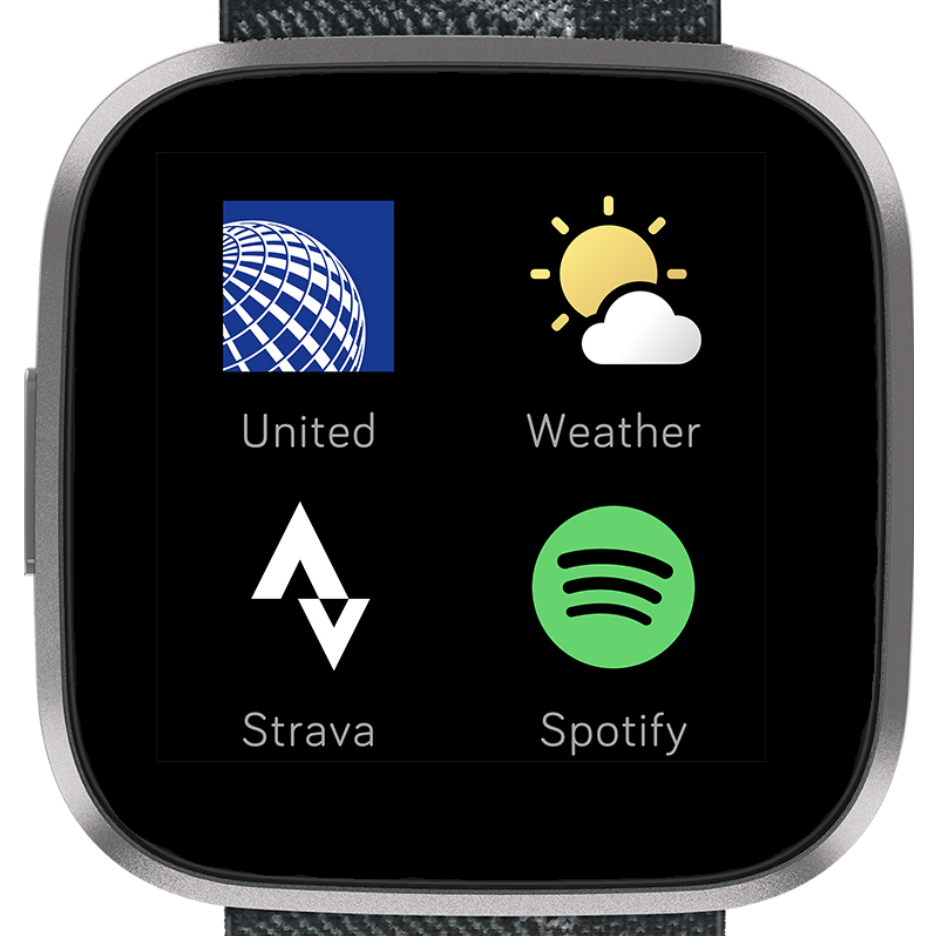 Fitbit OS has some important apps such as Uber and Strava (a fitness app with social network features). You have Spotify integration too but it doesn’t work as expected. You can play music through Spotify but can’t download the playlist for offline listening. This is a bummer since Fitbit Versa 2 is a premium smartwatch and is supposed to be competing with the likes of Apple and Samsung. You can still load your songs from local files since Fitbit Versa 2 has 2.5 GB of internal storage. 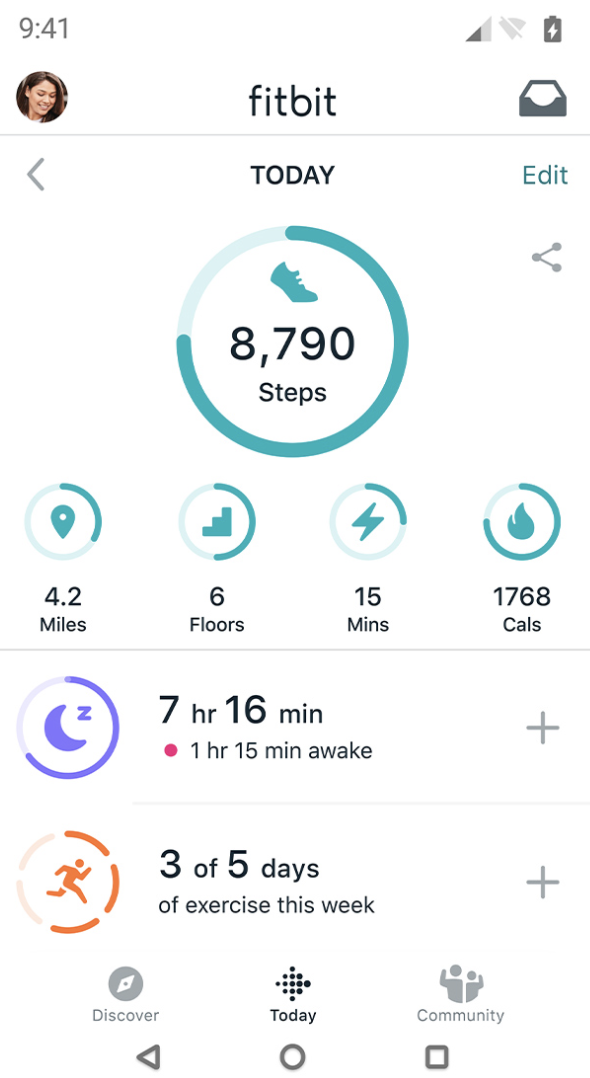 Fitbit has a strong community and this is leveraged in the Fitbit app. The ‘Today’ section displays all the health metrics such as step count, calories burned, resting heart rate, sleep quality indicators, etc.

The ‘Discover’ tab allows you to enroll in new workout programs and add more fitness options to your ‘Today’ screen.

The ‘Community’ tab is where all the action happens. It is basically a social network for fitness enthusiasts. This is where you post your fitness activity to the broader community. A fitness community is a healthy way to stay yourselves motivated and also make new connections.

Fitbit got its much needed boost in smartwatches through Fitbit Versa 2. It has a pretty good design and hardware. Accuracy of the fitness apps is excellent and it has tons of third-party watch faces. The Fitbit Versa 2 still needs to do some heavy lifting in order to compete with the Apple Watch. The voice assistant ‘Alexa’ needs a deeper integration, and we need a major increase in third-party app support. In-built GPS is expected at this price range and direct call option would be a good-to-have feature. Overall, Versa 2 is a sophisticated upgrade to its predecessor ‘Fitbit Versa’. It got many things right, but has some minor drawbacks as stated above.

Is fitbit versa 2 worth buying it?

No. Though the Fitbit Versa 2 does have a microphone, you cannot place or answer calls.