Amazon Echo Studio brings 3D audio that is similar to dolby atmos to your living room. The best Smart Speaker that offers a variety of streaming music services to play on the Studio, including Apple Music, Spotify, Tidal, Deezer, Pandora, SiriusXM, iHeartRadio, and TuneIn.

Amazon Echo Studio is Amazon’s first attempt to enter into the High-End smart speaker. A space that is dominated by respected players such as the Sonos One. Well, Amazon came close to the quality and functionality of the Sonos One. Echo Studio easily makes it to the list of top 10 best smart speakers to purchase in 2021. This device got more bass, and outputs massive sound with connected streaming services in your room.

Amazon Echo Studio brings 3D audio like dolby atmos to your living room. The sound quality is premium, and the speaker is fully equipped with Alexa skills that you would see in other Echo devices. Echo Studio can also work as a home theater speaker. It’s an eminent smart speaker for today, which is approximately priced at $199.99. The Echo Studio comes in Charcoal gray color. 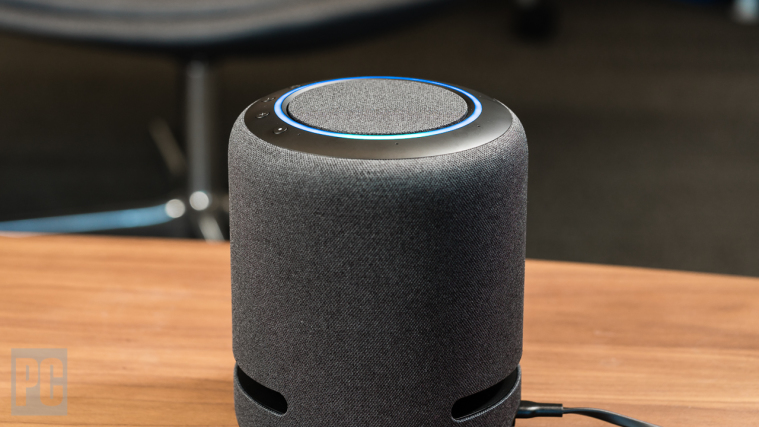 Echo Studio smart speakers are cylindrical in shape. The size of the Echo is 8.1”x6.9” (206 x 175 mm) and weighs approximately 3.86 kg. The body of the Echo is wrapped with plastic mesh fabric, with cutouts on the front and back for the two bass ports. A black plastic strip holds the far field microphones which are arranged in an array and also holds four buttons (if you don’t want to issue voice commands for some reason) for volume up ,volume down, action button (to activate Alexa), and microphone button.

Similar to the Echo series of products, there is a LED ring that is present at the inner edge of the plastic ring which turns blue in color when you call out Alexa, and the ring is tuned to display different colors based on the action the device is performing. The base of the Echo is made up of rubber which helps in maintaining the stiffness with any kind of surface. 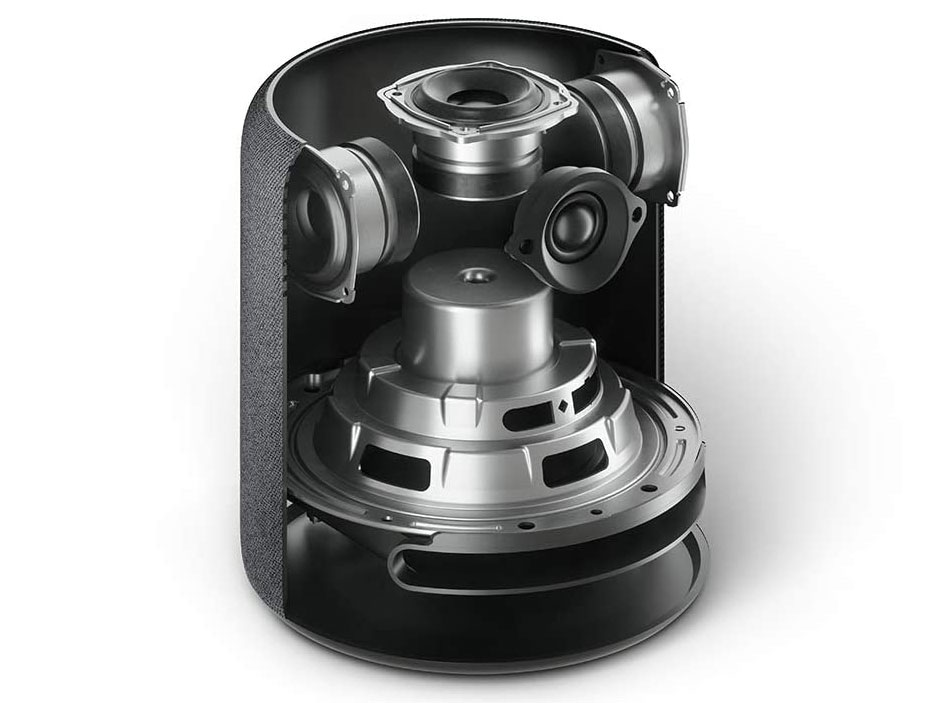 Echo Studio speakers also consist of 7 microphones. These microphones are arranged in a hexagonal pattern, with one microphone at each vertex and one in the center. The time difference between each microphone receiving the signal enables the device to identify the source of the voice and cancel out noise coming from the other directions.

Echo Studio is also furnished with Dual-band Wi-Fi (MIMO), and supports 802.11 a/b/g/n/ac (2.4 and 5 GHz) networks. Advanced Audio Distribution Profile (A2DP) supports audio streaming from your mobile device to Echo or from Echo to your Bluetooth speaker. The Amazon Echo Studio gets an auxiliary 3.5mm input jack that is used when you don’t want to stream audio wirelessly to the Studio. This means, you can connect any external speaker to the Echo Studio using the 3.5mm jack. The power port is needed since Echo Studio must always be connected to a power source.

Echo Studio has five different drivers which are behind the fabric grille cover of the Echo Studio,  arranged in different directions to provide Dolby Atmos compatible audio. A 5.25-inch woofer is present at the base of the speaker just above the bass ports, with a one-inch tweeter on the front, and three two-inch midrange drivers on the left, right, and upward. It is designed in such a way that no matter where you place the speaker it still gives you the optimal sound for that room.

The woofer provides the low-end, while the tweeter and three midrange drivers all work in sequence with each other to create a sound field with more precise output than a pair of stereo speakers.

The Echo Studio tries to do something more with the five drivers and 3D audio mixing. The Echo Studio puts out a large sound field with modest sound that can spread in all directions, and if you want to listen to Echo Studio’s 3D audio at its best, you need to subscribe to Amazon Music HD for access to Amazon’s Ultra HD music. This is currently the only streaming service that the Echo Studio supports fully for Dolby Atmos. Ultra HD tracks are mixed with Dolby Atmos, and the Echo Studio’s processing and drivers can give their best to use over stereo tracks streamed with Bluetooth or Wi-Fi.

Echo Studio as a Home hub: 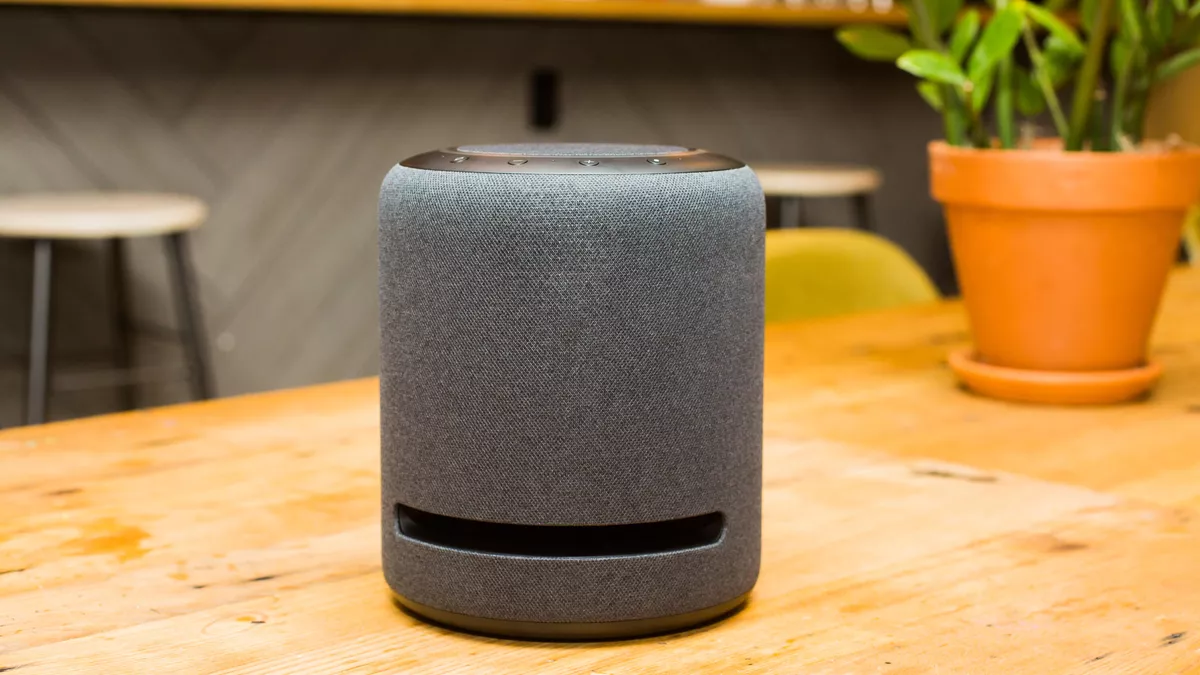 Echo Studio has a built-in Zigbee smart home automation hub, which helps the speaker to directly control smart home devices equipped with Zigbee including Philips Hue smart bulbs, tv and many other products. The range of compatible products increases vastly due to this integration.

You can Start by asking Alexa, its voice assistant to explore smart devices. If the device is one that’s compatible, Alexa will search and locate it within seconds, connect on its own, and then you can name the device in the Alexa app, such as living room light.

It is such an intelligent device speaker that automatically senses and analyses the acoustics of a room and produces fine-tunes audio playback, by continuously adjusting audio filters during music playback to deliver optimised sound output regardless of the placement. Make sure the device must not be muted for auto-sense and adaptation.

Echo Studio protects your privacy. Echo devices are made up of multiple layers of privacy protection. From microphone and camera controls to the ability to view and delete your voice recordings. For example, you can hit the microphone button to stop it from listening to your conversations. It won’t pick up the wake word during this mode. 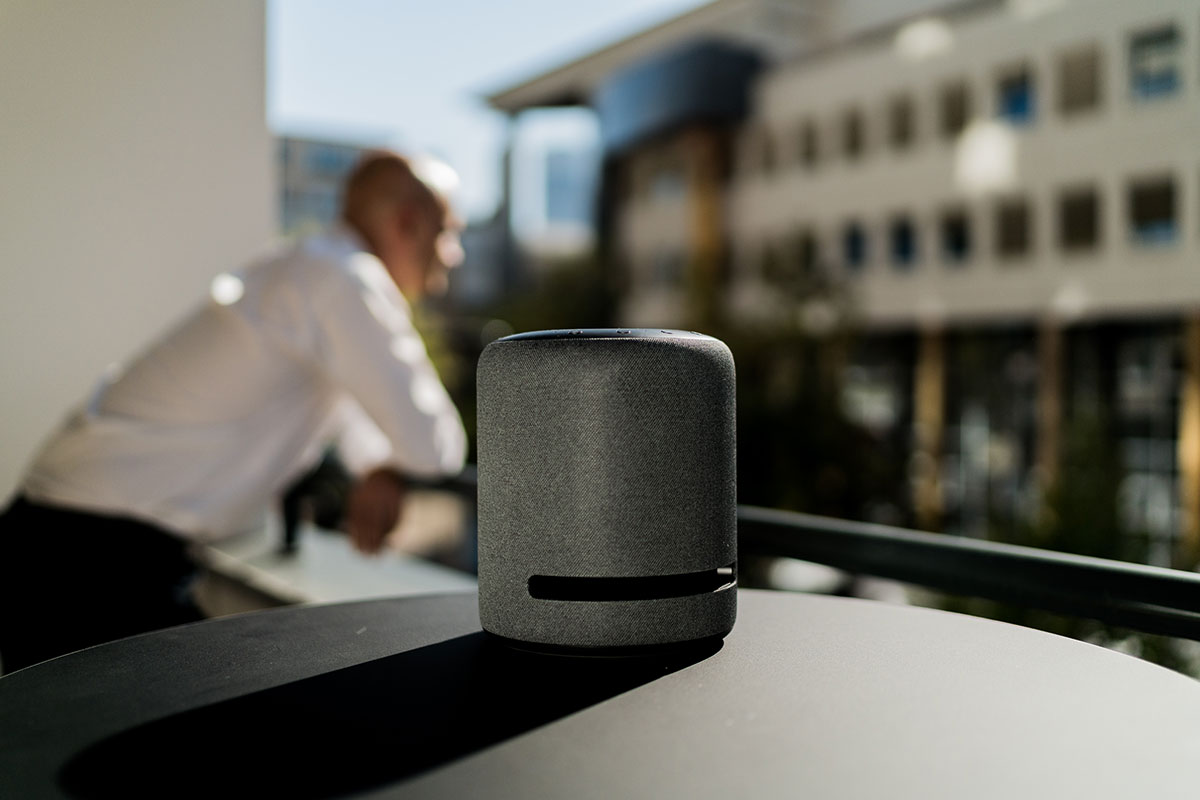 We can choose from a variety of streaming music services to play on the Studio, including Apple Music, Spotify, Tidal, Deezer, Pandora, SiriusXM, iHeartRadio, and TuneIn. The Studio will play music from any of those sources, either through their smartphone apps or by voice commands to Alexa. However, to access all the Studio’s premium audio features, you need to use Amazon’s $12.99 per month Music HD service with it, which includes support for high tracks and the new 3D music format.

3D music is a brand unique way to mix music that provides a more spatial experience than a standard stereo mix. The Echo Studio is the first smart speaker to support this new format, in either Dolby or Sony’s forms (Dolby Atmos Music and Sony’s 360 Reality Audio). Tracks that have been mixed in 3D music are intended to fill the room differently than a standard stereo song. There’s supposed to be a feeling that you’re being surrounded by music, and thanks to the ability for producers to put sound effects in different physical locations.

Echo Studio’s Stereo support is only limited to another Echo Studio device and Echo Sub. I would love to see Amazon extending this support to the most recent devices such as Echo Dot 4 and the Echo Plus. 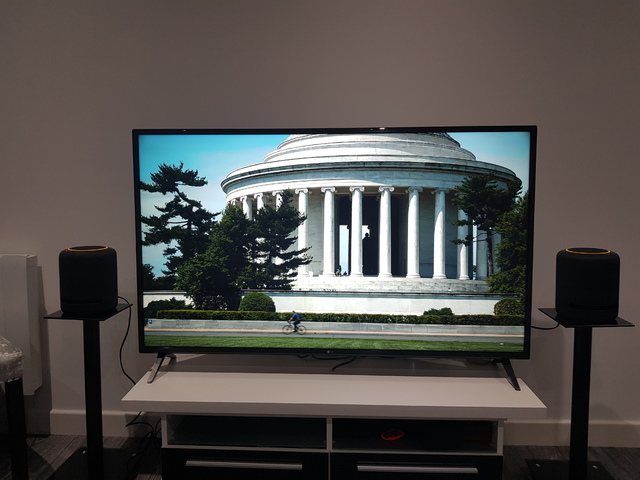 If you’re upgrading from the simple speakers built into your TV, or a stereo soundbar, it’s a good and simple upgrade to make. You’ll get a cracking, resonant bass response, marvellous volume and far more depth.

You can also create a stereo pair with two Echo Studios (Sounds very obvious at this point). By placing them either side of your TV you will experience powerful sound effects with excellent bass that give a cinematic sound experience at your home.

Final verdict:
Audio quality wise, the Amazon Echo Studio is the loudest speaker Amazon has produced till date. If you are already a fan of Echo dot series and willing to spend a few more bucks to have a premium sound quality that can fill your room along with all the skills Alexa comes with, then Echo Studio is a perfect product for you. Studio is not very costly either- for the amount of features the device is offering. With its Zigbee support, the Echo Studio is far more compatible with other connected devices than many smart speakers in the market. With its Dolby Atmos and Ultra HD audio, the Amazon Echo Studio can offer a pretty good experience at your home.