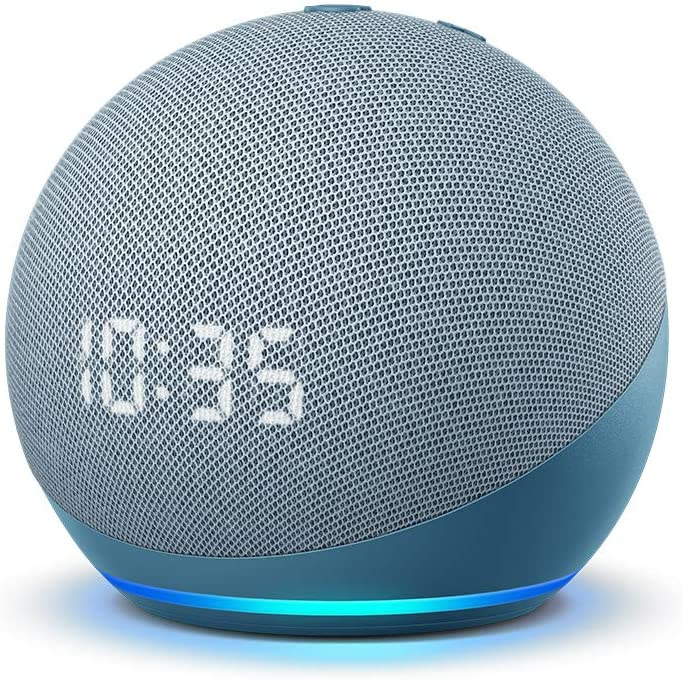 Amazon smart speakers have dominated the competition for quite some time. 4th Gen Wireless Smart Speaker with Amazon Alexa is the fourth iteration of their smart speaker lineup that squeezes into the 100 USD price club while offering revamped sound and connectivity. Amazon Echo 4th Gen also has a cheaper alternative titled Amazon Echo dot 4, designed to facilitate home automation rather than sound quality. The Amazon Echo 4 Smart Wi-Fi Speaker offers the best middle ground between audio quality and smart speaker by including a more powerful processor and local voice command processing.

Amazon Echo 4 ditches the cylindrical design prevalent through the older versions of the Echo series and adopts a spherical look. The appearance doesn’t give it much of a futuristic vibe, especially in the black color scheme. It comes in three color variations, namely Charcoal Black, Glacier White, and Twilight Blue. The Blue one looks mesmerizing in person, but that’s just my opinion. It has a LED lighting on the base of the speaker that is sadly non-configurable by the users.

The Amazon Echo 4 is best described as a spherical orb resting on a flat, illuminated base. It doesn’t wobble at all, which is great as the speaker has to be operated physically too. The majority portion of the smart speaker is covered with mesh fabric that is premium. Amazon is trying to reduce its carbon footprint by using recycled plastic for constructing the speaker, which is a gracious gesture. The dimensions of the Amazon Echo 4 Smart Wi-Fi Speaker are such that you can place it anywhere without disrupting your room decor. The smart speaker weighs just under 1 kilogram and isn’t that heavy when comparing it with similar competitors by Google. 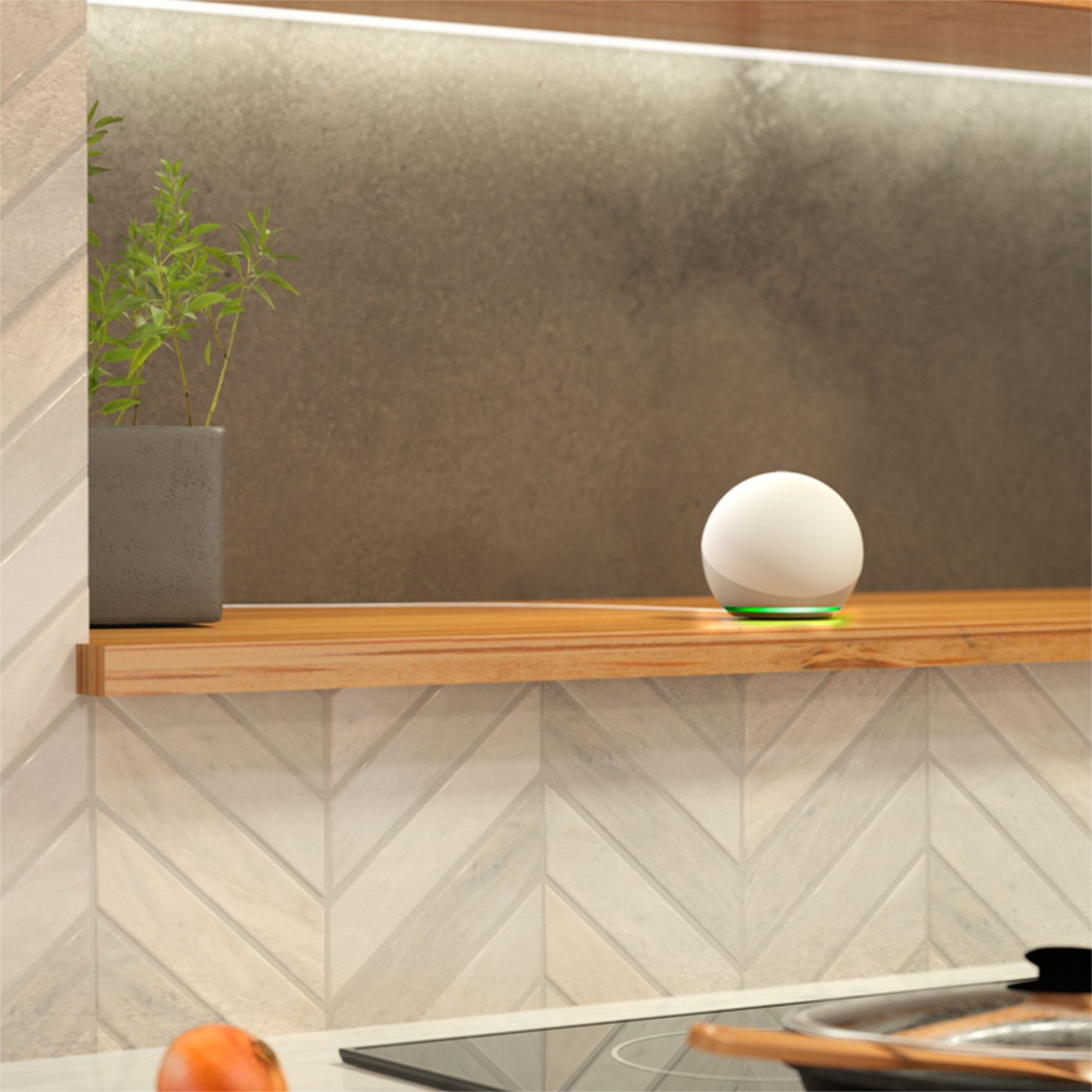 Amazon Echo 4th Gen has upgraded its connectivity options and now packs a Wi-Fi 5 connectivity card with support for dual-band connection. Wi-Fi 5 support is great if you have a dual-band router at your home or office, and the smart speaker can now take advantage of a faster internet connection. It still doesn’t support peer-to-peer Wi-Fi networks because of security concerns.

The smart speaker supports Bluetooth, Zigbee, and Sidewalk wireless connectivity to cycle between power conserving modes and acts as a hub for compatible products, including cameras and light bulbs. The power demand has doubled in this version of Amazon Echo, and it now requires a 30 Watt power provided by the proprietary charger. It has a 3.5 mm audio in/out port that means you can play your songs directly from your smartphone to the speaker. You also connect it to another powerful speaker set using a 3.5 mm AUX cable. There is no inbuilt battery, and the smart speaker runs directly via the AC power adaptor.

Amazon Echo 4 Smart Wi-Fi Speaker has four buttons: the volume increase and decrease button, a mute microphone button, and a voice command button. The buttons do not feel mushy and have a slight click to them. There is no button to turn off the device directly, and that is done by using the app or manually shutting the power socket. 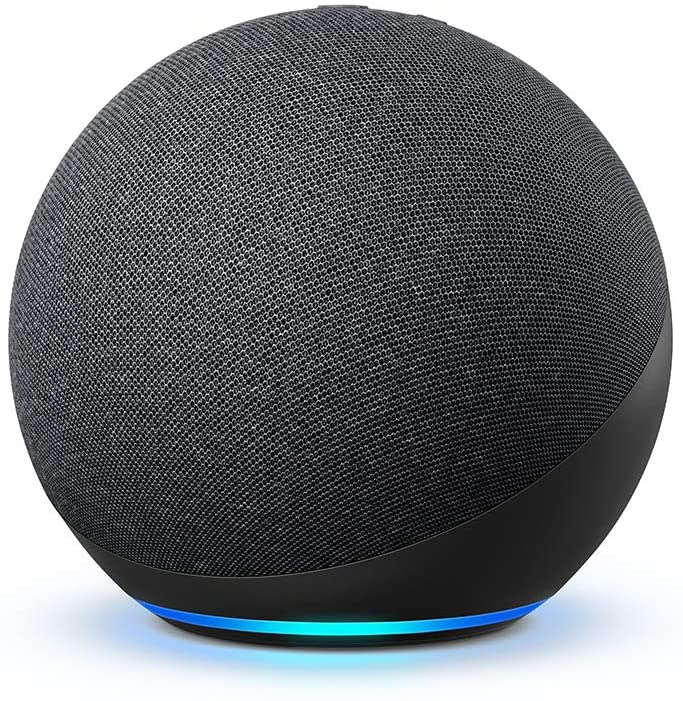 The latest iteration of Amazon Echo brings a significant improvement in the speaker configuration and positioning. It adds another 0.8-inch tweeter into the mix that makes the audio output more clear and crisp. The smart speaker uses a combination of a 3-inch neodymium woofer with two 0.8 mm tweeters to help produce a spatial sound effect. Amazon recommends the users be positioned at least 6 feet from the speakers for best audio quality. Unlike the Amazon Echo 3, the Amazon Echo 4 Smart Speaker has a front-firing design that means you have to place it back to the wall.

It tries its best to deliver a faux surround sound experience, but that feature is best left to speakers having 360-degree sound delivering design. As for the audio quality, it is phenomenal for a mid-size speaker. The bass is predominant on the Amazon Echo 4, and no matter what track I played, the result was outstanding. Another great thing is that there is no audible distortion, even at maximum volume, which is great for a small-sized speaker of this caliber. Amazon Echo 4th Gen Smart Speaker has the same restrictions in place which obstructs casting music from any music streaming service except Amazon Prime Music.

So, be prepared to switch if you are thinking of integrating Alexa with your smart devices. You cannot stream music directly from a YouTube music app and have to use the Bluetooth mode or Aux mode to connect your device to echo and then play music. Like Sonos smart speaker, Amazon Echo 4 supports a multi-room setup. You can collect a bunch of Amazon Echo 4th Gen Smart Wi-Fi Speaker and play a single music track, podcast, or even make calls across all of them. 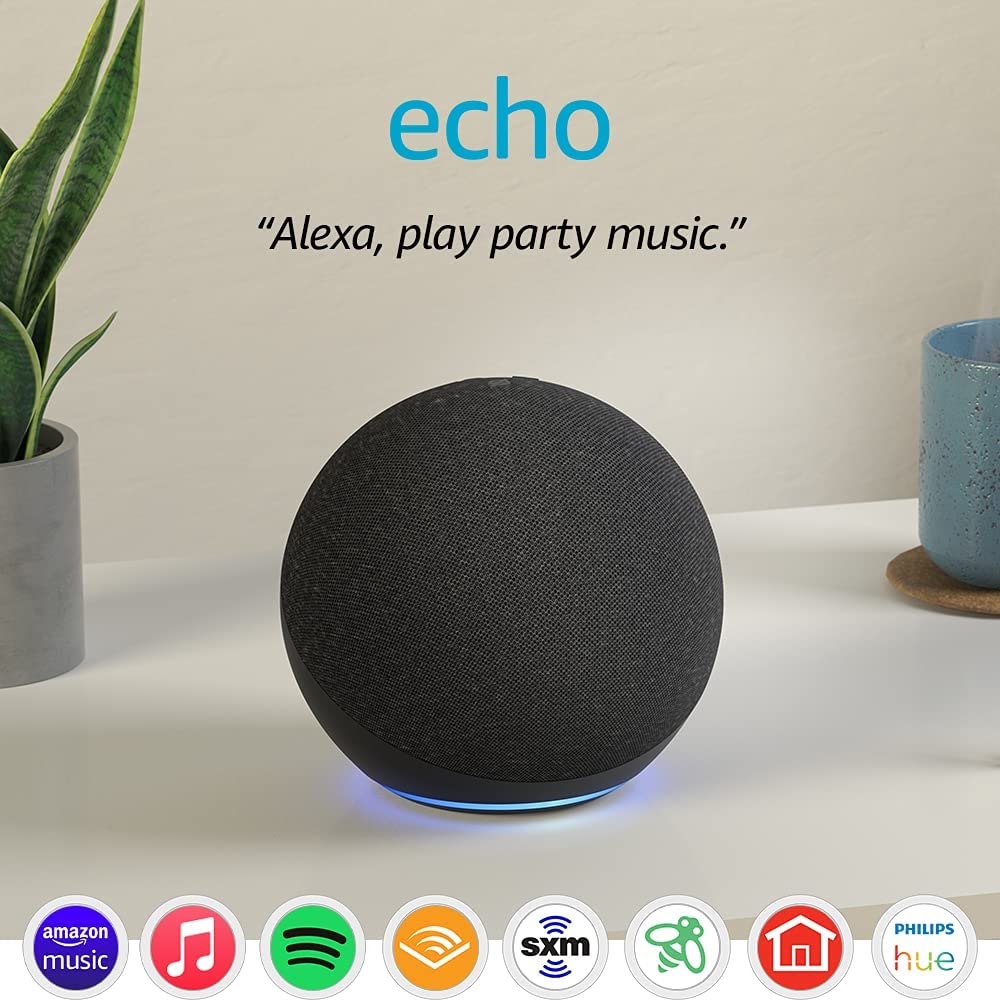 Alexa is the inbuilt voice assistant for Amazon smart speakers, and this version receives advanced speech recognition hardware. Alexa can solve your music queries, inquiries, make calls, and do everything with your voice command. You can also set up Alexa to respond to fire alarms and map tasks started with each voice command. Setting up routines is also possible with Alexa, and it allows you to set up to 99 unique routines. Routines are repetitive tasks that do not require human supervision, for eg, turning the light off after 10 pm, locking doors, turning on the air conditioner before you arrive, etc.

The Alexa Guard is a smart security mechanism that prompts alerts for potential breaches in security and even works in tandem with your smart lights and security cameras. Alexa Guard is available in both free and paid tiers but I would recommend the latter for ultimate security and peace of mind while you are away. 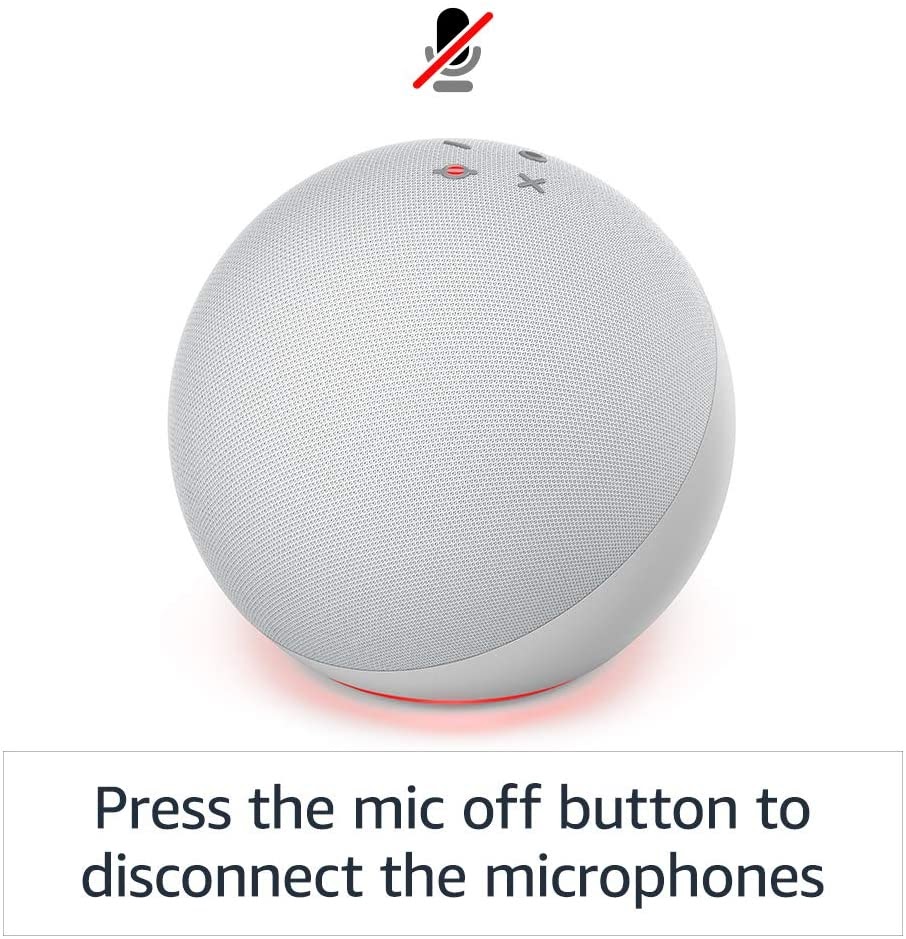 The Alexa experience is improved with the new AZ1 Neural Edge processor made by Amazon specifically for machine learning. By integrating the latest processor, Alexa will process simpler voice command queries on the device itself. It will curb the need to search the Cloud servers. The processor is slowly showing its capability to comprehend natural language queries easily. Voice assistants work well when you ask them in pre-programmed syntax commands but struggle with simple human language. There isn’t much difference visible yet, but you can expect the conversations with Alexa to get significantly better after a few updates.

Now, the Amazon Echo 4th Gen can act as a hub for your other smart devices. Also, you can use the smart speaker to connect and operate them. Pairing them is very easy, and mapping routines and turning them on and off. There is a slight learning curve that you have to learn your ways around the Zigbee hub application. Also, you can control your home automation devices better. Pairing is very easy as you have to power on all your devices. Also, then issue a command for discovering all the devices. By purchasing an Amazon Echo 4, you eliminate the need for a dedicated Zigbee hub. Which is costly and often very limiting in features.

Alexa Build-in Amazon Echo 4 Smart Wi-Fi Speaker supports sidewalk out of the box and is even enabled by default in most units. It is a developing concept that uses a 900 MHz spectrum to extend the connectivity range for IoT devices like doorbell sensors, cameras, lights, etc.

Amazon Echo 4 has a powerful kids mode that can answer your toddler’s queries and can also filter explicit results. The kid’s mode gives full control to the parents to help answer their never-ending queries with a simple voice command. 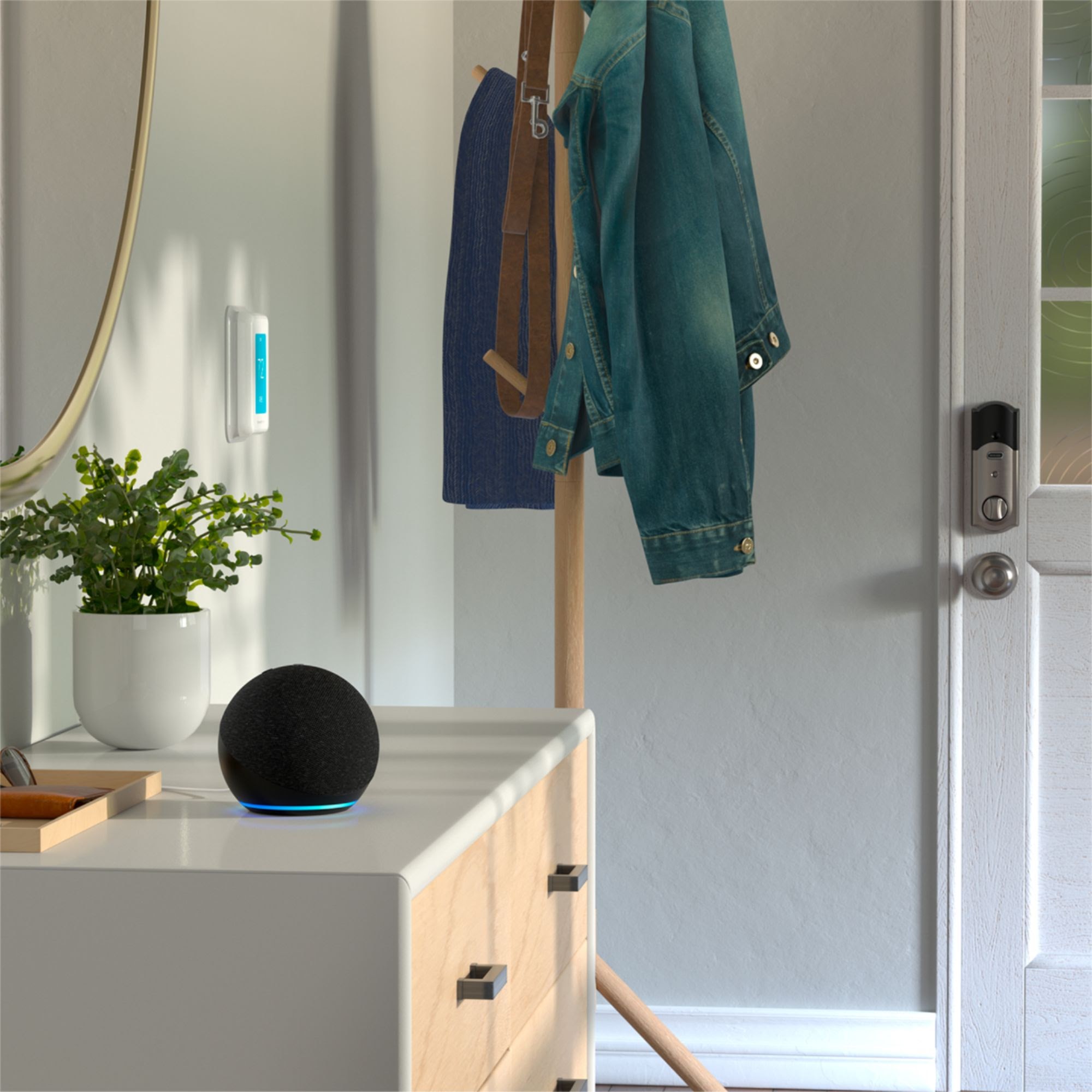 Amazon Echo 4th Gen is available for 99 USD with no ludicrous add-ons. Considering the features packed into this tiny smart speaker, I would say that it is cheaper than newer generation offerings.

Amazon Echo 4th Gen has a jacked-up processor that can process natural language queries and fetch faster results. The smart speaker can capture the voice commands even while the music is playing. Its audio output is above average if you factor in the many tiny components packed along with the smart speaker. It is priced aptly and is loaded with useful upgrades, including Zigbee hub, Dolby audio support. And, it will compatible with many music streaming applications, etc.

You can make calls to other Echo 4 in the house and connect with them. There are a few improvement areas that include a configurable RGB lighting effect. Also, a dedicated power off button, and better far-field microphones.